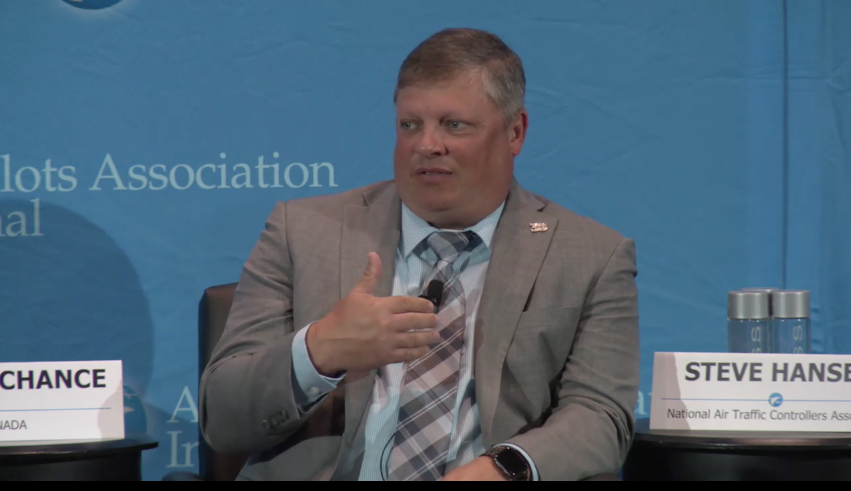 TBFM replaced vectoring with a trajectory-based operation. It was put into en route centers 15 years ago. Because there wasn’t a proper rollout, education, or training, the technology was ignored and discarded, Hansen said. Starting a few years ago, NATCA and the FAA worked collaboratively on it.

“It’s a great tool,” Hansen said. “It can help enhance the system.”

Hansen said getting TBFM to work is the key for “everything else to work. That’s probably our biggest challenge right now, and one of the biggest cultural issues within the ATC workforce.”

Bridget Gee, DFW Tower, Runway Safety & RWSL Representative spoke during a panel titled “Enhancing Safety at the Surface.” The group primarily discussed Runway Status Lights (RWSL) and Engineered Material Arresting System (EMAS). The RWSL system processes ASDE-X/ASSC Surveillance data to turn Red Lights on or off, indicating that it is unsafe or safe to proceed when accompanied with a control instruction. This advisory system is designed to reduce the number and severity of runway incursions without interfering with airport operations by increasing situational awareness to pilots and vehicle operators.

The RWSL system is operational at 20 of some of the busiest U.S. airports. With regards to RWSL, the panel discussed how the system operates, how it is controlled, the training for both pilots and controllers, how the system has reduced runway incursions and their severity, as well as what to do if a pilot experiences red lights.

The panel also discussed a video of an EMAS save in Key West, Fla. The group discussed how EMAS is designed, the materials it is made of, how an EMAS can save lives, and the lack of pilots briefing the EMAS system on flights. EMAS is currently installed at 106 runway ends at 67 airports in the U.S. with plans to install seven more systems at six additional U.S. airports.