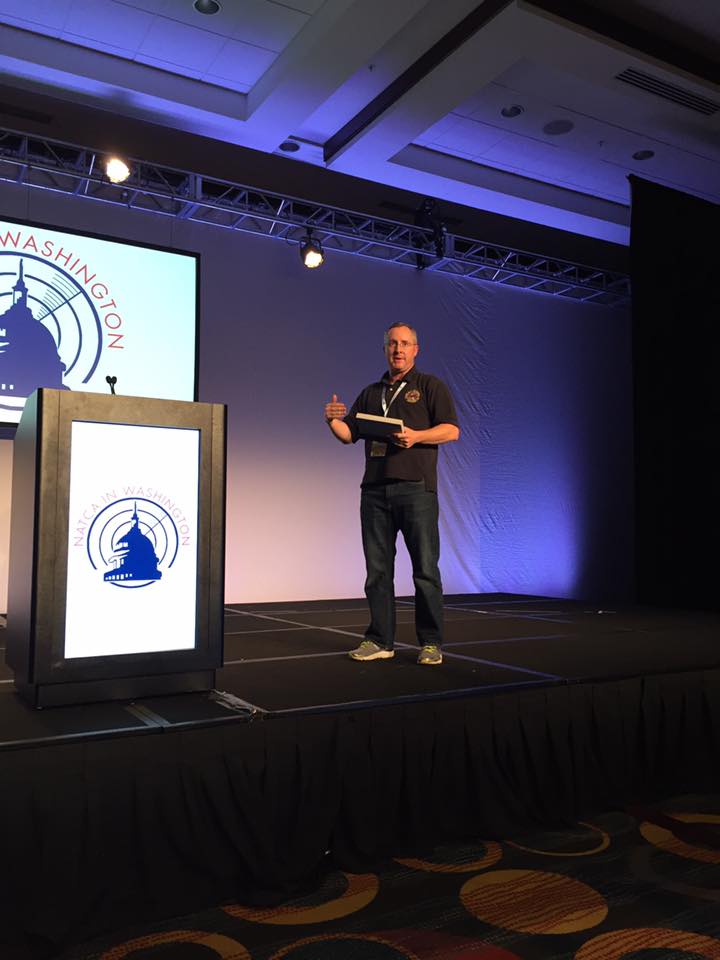 Born and raised, other places of living: Born and raised in Long Island, N.Y. We moved to Jim Thorpe, Pa., when I was 12, then I left for college in Daytona Beach, Fla.

Education: I graduated from Embry-Riddle Aeronautical University in 2004.

Q: How did you become a NATCA member?
A: Growing up in Pennsylvania, we had a family friend who was an air traffic controller in Allentown, Pa. (ABE). When I was in high school, I started learning how to fly, and he offered to take me to the facility to show me what was on the other side of the radio. Several years later when I told him I wanted to be a controller, he gave me three pieces of advice: Get used to working weekends, invest in a good pair of dark sunglasses, and join the Union on the first day. I did all three.

Q: How did you get involved and what are you involved in with NATCA?
A: I was one of the folks who got hired during the mess of the Green Book/White Book transition. At the time, I didn’t really understand, so I just focused on my training. I trained all through the White Book and I heard and saw a lot of things that opened my eyes. Soon after becoming a CPC (Certified Professional Controller) I approached my FacRep and told him I wanted to get involved in any way possible — and I was willing to learn. I was given several small roles over the next few years, attended some NATCA academy classes, and ran in the next Area Rep election. I am in my fourth year as the ZJX South Area Rep and my second year as the North Florida State Legislative Coordinator.

Q: What made you decide to take on leadership roles within NATCA?
A: I was fortunate to have strong leaders at my local, and I learned a great deal just by watching them work. Their tenacity and tireless work ethic showed me that being an educated and involved member can and does make a difference in our daily work lives and our profession as a whole.

Q: What’s the most rewarding part of being a Legislative Rep? What’s the most challenging?
A: The most rewarding thing is seeing a bill become law, and knowing that I played a small part in it. The most challenging thing is taking time away from my wife and kids. Legislative activity cannot take place at work or on official time, so I spend a lot of regular days off and annual leave building relationships with our elected officials.

Q: What was it like to be presented with a regional legislative award at NATCA in Washington this year?
A: As any rep will tell you, it is often a thankless job. We know this getting in and don’t expect any praise. To be recognized by my Regional Vice President Jim Marinitti and my National Legislative Committee member Stan Parulski was a tremendous honor. To receive the award in front of more than 100 other legislative activists from my region made it that much better, because they understand what it really means to be a legislative activist. It’s not often that I am caught off-guard, but they truly surprised me. I am grateful to be surrounded by such dedicated and passionate leaders.

Q: Out of all your involvement within NATCA, what speaks to you the most?
A: The unyielding dedication of our National Executive Board, FacReps, and legislative reps, and the camaraderie of our membership. It truly is a brotherhood.

Q: Has there been a favorite moment for you while at NATCA?
A: In 2014 I attended my first national convention in Minneapolis, and I got up to the microphone to speak on an issue. The room was silent and all eyes were on me, and they wanted to hear what I had to say. It showed me just how seriously this Union takes its business. It was a powerful moment.

Q: Do you have any advice/tips/messages for members who would like to get involved?
A: It’s a simple as talking to your FacRep and saying you want to get involved. You don’t need to be an expert on the contract or legislative issues. There is a huge support system of NATCA reps out there and they will teach you everything you could ever want to know in due time. Someday they will retire, but in the mean time they are eager to train the next generation of this Union’s leaders. Step up and you will make a difference.

My celebrity crush is: My wife, nice try.
I absolutely cannot stand: When someone takes food off my plate. I don’t mind sharing, just ask first!
My specialty meal to cook is: Steaks on the grill.
My local hotspot is: The Waterwheel, a local cigar lounge.
If I could pick four people to have dinner with, dead or alive, I would you choose: George Carlin, John F. Kennedy, Colonel Sanders, and my wife.
My biggest pet peeve is: When people use fake Irish accents, usually around St. Patricks Day.
My favorite comfort food is: Hot & gooey chocolate chip cookies.
My favorite book I could read over and over is: Any Calvin & Hobbes book
The best place I’ve ever travelled to was: New Zealand
My favorite sport is: Hockey.
My father always told me: “You always get a better deal when you pay cash, nobody likes paying taxes.” (Thanks Dad).
My favorite type of aircraft is: Boeing 747.
If I could have a theme song, it would be: Anything with bagpipes.
My favorite sports team that I live and breathe is: Florida State Seminoles.
The funniest movie I have ever seen is: Hot Tub Time Machine.
The strangest food I have ever eaten is: Baby corn. It’s just weird.
The one chore I absolutely hate doing is: Emptying the dishwasher.
The one thing that always makes me laugh is: Cat videos. And I don’t even like cats.
Candy or Chocolate? Chocolate.
Dogs or cats? Dogs.
NFL or NCAA Football? NCAA.