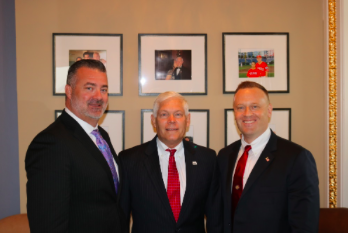 NATCA held its second rolling lobby week of September 2017 in Washington, D.C. Over the past two weeks, 45 activists have taken 310 congressional appointments. To prepare them for their Congressional visits, prior to NATCA members hitting Capitol Hill, National Legislative Committee Chairman Steve Weidner, along with Jose Ceballos, John Bressler, Allie Valocchi Cloyes, and Michelle Fevola of NATCA’s Government Affairs Staff, briefed visiting activists at the NATCA National Office. The activists and NATCA’s Government Affairs staff attended meetings with members of both the House and Senate.

Activists discussed the ongoing FAA staffing crisis, including the 28-year low of certified professional controllers (CPC). Nearly 30 percent of the CPC workforce is eligible to retire. They also discussed the adverse effects that suggested changes to federal employee retirements (being discussed in the U.S. House of Representatives as part of the FY18 federal budget negotiations) can have on those who keep the National Airspace System running.

Republican Congressman Pete Sessions, who represents the 32nd District in Texas, wrote about NATCA’s visit to his office in his “Congressman Sessions Hill Report” last week:

National Air Traffic Controllers Association
This week I was delighted to meet with the National Air Traffic Controllers Association (NATCA) to discuss Air Traffic Controller (ATC) staffing issues and the 21st Century AIRR Act. Controller staffing levels have reached a critical issue as more and more ATC’s are now at the mandatory retirement age and do not have a viable replacement to fill their position. This issue, combined with our outdated and antiquated national air transportation system, has placed our nation at a large competitive disadvantage when compared to other countries. Simply put, the FAA’s bureaucratic structure is failing at the expense of our country’s commercial air travel network and it is time to fix these issues with smart policy.

Photo below courtesy of Congressman Sessions.