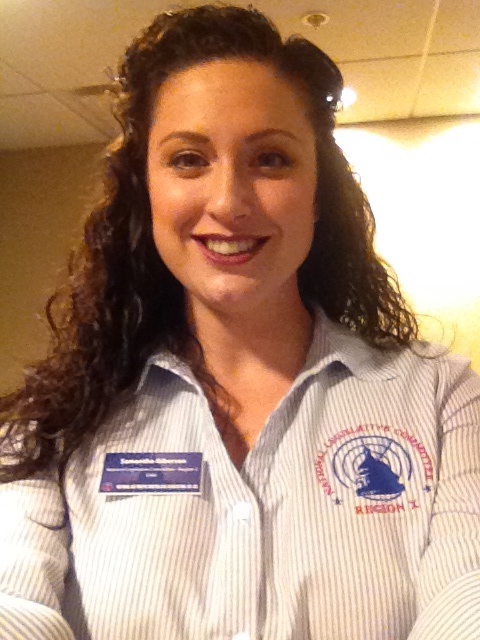 NATCA: I was a mentee in the National Legislative Committee (NLC) Mentorship Program for one year and have been the Region X NLC Chair for two years.

Born and raised, other places of living: I was born and raised in the perfectly rainy greater Seattle area. I’ve lived in Pittsburgh and Paris as well during college.

Education: Bachelor of Arts from Westminster College in International Politics and French. I also studied abroad in Paris at the Sorbonne.

Family: Married with many fur babies.

Q: How did you become a NATCA member?
A: I joined NATCA along with many people in my office who were joining. FAA management had been making a lot of management and personnel changes, and people recognized that NATCA was working hard to negotiate and intervene on those changes. We wanted to feel as protected as possible.

Q: How did you get involved and what are you involved in with NATCA?
A: My local was looking to send someone to NATCA in Washington (NiW) and the person next to me was asked, but didn’t want to buy a suit. So, he recommended me. I jumped at the chance with no idea what I was getting into. It was amazing to learn that NATCA was involved on such a large scale with trying to influence the future of its members and our workforce. Once I experienced that event, I knew I was hooked.

Q: What made you decide to take on leadership roles within NATCA?
A: When I was asked to join the NLC Mentorship program, I realized that my NATCA team and Regional Vice President (RVP) saw something in me that unfortunately, my FAA work had made me forget. NATCA helped me remember the smart and driven person that I had been most of my life. By taking on a leadership role within NATCA, I hope I can also help others believe in themselves.

Q: What’s the most rewarding part of being a Legislative Rep? What’s the most challenging?
A: The most rewarding part is being a part of effecting change in legislation that directly affects my job. The most challenging part is the apathy encountered from co-workers, and sometimes, fellow NATCA members that don’t understand the importance of NATCA’s legislative work.

Q: What was it like to be presented with a regional legislative award at NATCA in Washington this year?
A: Ha! Well, this was quite the surprise for me as the NLC member is usually involved with choosing the regional award winner. I was startled when my RVP, Mike MacDonald, commandeered the presentation and announced my name! My favorite part was hearing from my fellow Region X members that they felt so happy to see their positions and roles represented in this year’s NiW Today magazine, where we had listed the Region X job titles and descriptions. I was so happy to hear them say they felt more a part of NATCA.

Q: Out of all your involvement within NATCA, what speaks to you the most?
A: What speaks to me the most is how proactive and agile our leadership is. Each time we hear from NATCA’s leadership, I’m always amazed how informed they are and their drive to ensure the membership is apprised as well.

Q: Has there been a favorite moment for you while at NATCA?
A: The opening of my first NiW. It was my first major NATCA event and I was blown away.

Q: Do you have any advice/tips/messages for members who would like to get involved?
A: Talk to people about what aspects in NATCA you are passionate about. You will be amazed at how many opportunities there are to get involved.

My favorite band is: Nirvana.
My favorite quote is: “Life engenders life. Energy creates energy. It is by spending oneself that one becomes rich.” –Sarah Bernhardt
My celebrity crush is: Sam Heughan who plays Jamie Fraser in Outlander.
I have a major phobia of: The ocean! It’s evil.
I absolutely cannot stand: Boasting and bullying. Be kind and humble.
My specialty meal to cook is: Lamb roast with rosemary and balsamic vinaigrette.
My local hotspot is: Pogacha – a local restaurant.
If I could pick four people to have dinner with, dead or alive, I would choose: My Great-Grand-Bubba, Marilyn Monroe, Edith Piaf, and Elizabeth Warren.
My biggest pet peeve is: People chewing with their mouth open! JUST DON’T.
My favorite comfort food is: Pizza.
My favorite book I could read over and over is: Black Beauty.
The best place I’ve ever travelled to was: Paris. Always and forever.
My favorite sport is: Most anything equestrian.
My mother/father always told me: Hippie stuff, usually about the government. I guess I showed them by working for the government!
My favorite type of aircraft is: Boeing 787. It has beautiful wings that remind me of the old-fashioned hood ornaments.
If I could have a theme song, it would be: Wonder Woman theme song!
My favorite sports team that I live and breathe is: Sea-HAWKS!
The funniest movie I have ever seen is: Talladega Nights.
The one chore I absolutely hate doing is: Laundry. I’d rather muck the barn.
The one thing that always makes me laugh is: Watching my corgi jump — those legs.
Candy or Chocolate? CHOCOLATE — must be dark though!
Dogs or cats? Dogs, but cats are pretty handy in the barn.
NFL or NCAA Football? NFL – Russell Wilson is too cute not to watch.
In my spare time, I enjoy: Riding my horse and binge watching British period movies and TV.