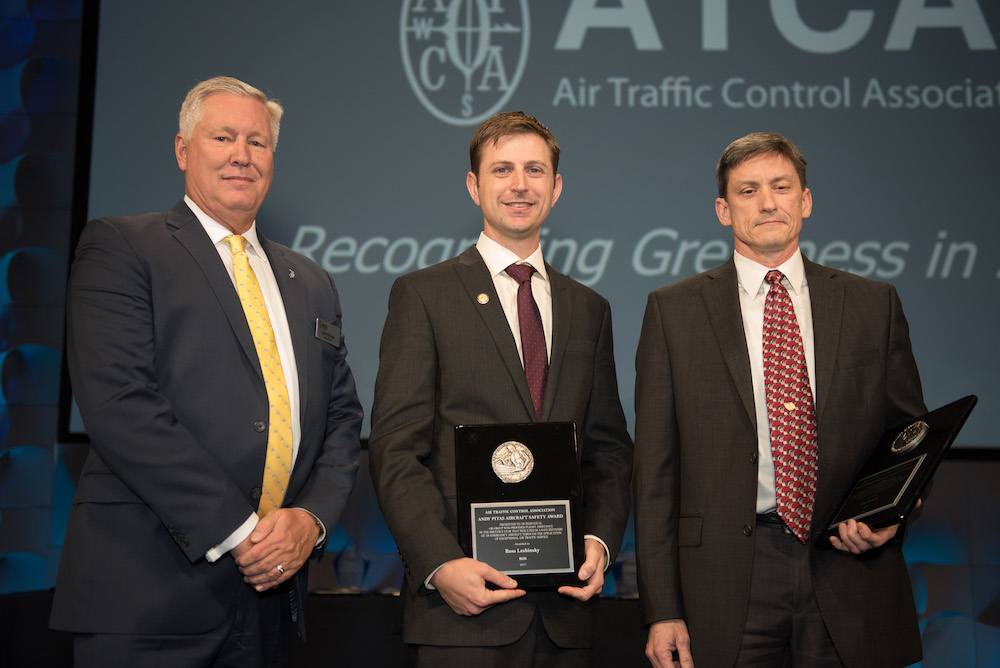 The Air Traffic Control Association’s (ATCA) 62nd Annual Conference was held at the Gaylord National Resort & Convention Center in National Harbor, Md., Oct. 16-18. The conference is an opportunity for attendees to learn from the best from ATCA member organizations and the aviation community at large. ATCA President and CEO Peter F. Dumont referred to the conference as “aviation’s homecoming” during his welcome remarks on Monday.

Dumont closed his welcoming remarks by tasking attendees to help build a bridge to the future generation of aviation leaders. He stated, “We all have the same overarching goals. Making the system safer and more efficient.”

Federal Aviation Administration (FAA) Administrator Michael Huerta gave opening keynote remarks for the conference. He highlighted the rapid pace of change in the aviation industry and said that safety must continue to be everyone’s primary objective. He described the National Airspace System as a valuable public resource that requires stakeholders to collaborate to remain the safest and most efficient in the world.

Administrator Huerta explained that through the changes in the industry, one thing has remained constant: a deep and abiding commitment to safety.

“We approach shared commitment to safety as a team,” he said. “Collaborate, share data, and work together to find solutions. We can’t allow ourselves to dig into our own position so deeply, that we are talking past one another. If we only develop a system for today, we will have failed.”

A major component of the conference was honoring the men and women who went above and beyond the call of aviation safety professional at the ATCA Annual Awards luncheon.

Five NATCA members were honored with the Andy Pitas Aircraft Save Award. The award honors an individual or group who provided flight assistance in the previous year that resulted in the safe recovery of an aircraft in distress through the application of exceptional air traffic service.

NATCA members on the Southern California Metroplex Design and Implementation Team were also honored with the ATCA Annual Team Award for Outstanding Achievement (formerly the Earl F. Ward Memorial Award). This award honors a group for an outstanding achievement during the previous year that has added to the quality, safety or efficiency of air traffic control.

On Oct. 20, 2016, BOS was short-staffed when they got a call from the hospital that the frontline manager’s wife had been in an accident and that he needed to go to the hospital immediately.

Shortly after, a Piedmont Airlines De Havilland Dash 8-300 aircraft was on final approach. The aircraft was coming in on the 15R circle approach when the controller in charge (CIC), Knight, and local control west (LCW) controller Leshinky, noticed that the aircraft was on an abnormal profile. Everyone in the tower kept an eye on the aircraft, as it was short on base over the channel. It came in on a short dogleg, and when the pilot rolled out with less than an eighth of a mile to go, he lined up for Taxiway B instead of the open runway.

Knight immediately noted the pilot was lined up for the taxiway and Leshinsky instructed him to go around, which he did. The aircraft flew over a JetBlue aircraft that was on the taxiway. The controllers’ teamwork and attention to detail working a busy traffic area prevented a potentially devastating outcome.

Leshinsky thanked his wife and the BOS tower team, who he said was as the best he has ever worked with because of their willingness to always help each other.

Knight also thanked his wife and the teamwork of the five BOS controllers in the tower that evening. Knight said Leshinsky did his job that day by letting him know something didn’t look right.

“Everyone had input on this team effort,” Knight said. “Thank you very much.”

A runway at SLC had been closed due to poor runway conditions amid other factors — snowstorms, aircraft de-icing, reduced visibility, and runway visual range (RVR) advisories. Shortly after the airport operations manager reopened the runway, an aircraft was taxied to the runway for departure. The runway was not visible from the tower. Rawson had just returned from break and had been assigned to relieve the controller from the local control east (LCE) position.

The LCE controller was in the process of issuing winds, RVRs, and runway condition codes to the departing aircraft. After issuing the information, he cleared the aircraft for takeoff and began a position relief briefing.

Rawson then observed a primary target on the departure end of the runway moving towards the departing aircraft. Rawson quickly brought the target to the attention of the LCE controller, who cancelled the aircraft’s takeoff clearance. The aircraft was instructed to hold in position as the target proceeded towards the aircraft. The pilot reported that he had an airport operations vehicle in sight and that the vehicle was exiting the runway towards a taxiway.

After inspection of the runway incursion, it was determined that an electrical contract work truck had entered and proceeded down the runway. Rawson’s astute observation prevented a potential disaster.

“My favorite aspect of being in the aviation community is having a huge part in moving thousands of people from point A to point B safely and efficiently on a daily basis,” Rawson said.

The pilot’s emergency code appeared intermittently and then stopped completely. The target disappeared from the radar, with no voice communication from the pilot. Turner processed an alert notice requesting an extensive communication search for overdue, unreported, or missing aircraft. The controllers continued to try to contact the pilot to no avail, but observed a faint blip return to the radar screen that appeared to be proceeding to the southwest along the previous track flown by the Cessna. Porter split off that radar sector to isolate the frequencies in an effort to reestablish communications with the blip, which he hoped was the Cessna pilot.

Over the next 40 minutes, Porter repeatedly attempted to advise the aircraft of its position to emergency airports and weather conditions favorable for visual flight rules landing. He coordinated with Hunton on possible emergency airports located just south of Dallas. Hunton and Porter brainstormed ways to contact the Cessna and asked Beck to look up the Cessna’s talk number in the FAA Airman’s Registry.

After exhausting most attempts to contact the aircraft, Enis asked for the pilot’s phone number so he could step out of the area and call the pilot himself. From his experience during Hurricane Ike in 2008, Beck remembered that sometimes only text messages go through, and asked Enis to text the pilot’s cell phone instead. Contact was successful; but the situation was dire.

Clifford worked with Hunton and Herd to contact Greenville security to turn on the airport runway lights, and also advised fire and rescue of the emergency aircraft inbound to the field. The pilot lined up for the Greenville Majors Airport and circled to make an approach to the north. Working with Clifford, Greenville Fire Rescue personnel reported that they saw a small aircraft land on the runway and were able to verify the tail number as that of the plane in distress. A few moments later, the pilot texted Enis: “Landed safely…By the grace of God.”

“The tenacity and professionalism displayed by the Fort Worth team was of the highest standard,” ZFW FacRep Nick Daniels said. “Their example is indicative of the dedication by our controllers to work together and help maintain our portion of the safest airspace in the world.”

Accepting the award, the team members said the event speaks to what air traffic controllers do everyday. Their collective 175 years of experience displayed why teamwork is so important when there is a pilot in the dark who needs help.

The project implements a regional network of enhanced PBN routes and procedures covering most of Southern California from the Mexico border to Santa Barbara and east into the deserts. More than 150 new modified arrival, departure, and approach procedures were collaboratively developed, exhaustively evaluated through flight simulation and Human-In-The-Loop Simulation, and implemented. The total includes 99 new satellite-based procedures, which is a key goal of NextGen.