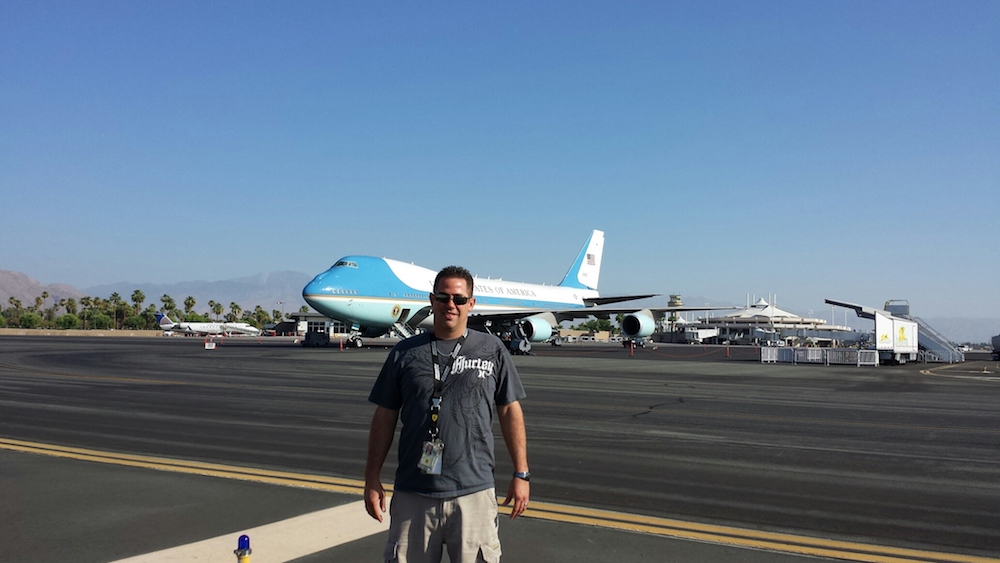 Nearly a decade of air traffic control experience at Palm Springs (PSP) has taught Jeremiah Luigs-Brown to keep an eye peeled for pilots flying by sight, and his diligence prevented a potential mid-air collision this summer.

“Mr. Luigs-Brown was instrumental in preventing a disaster, saving lives and maintaining the safety and integrity of our National Airspace System at Palm Springs,” Air Traffic Manager Dianna Johnston said.

The incident happened just before noon on June 14, as Luigs-Brown worked the local control position at PSP. Air traffic was light, typical for that time of day during the slower summer season.

Palm Springs International Airport sits in a U-shaped valley, with an opening to the east along Interstate 10. It is a major corridor for pilots operating under visual flight rules (VFR) to Palm Springs and two other major airfields within about 20 miles.

“The terrain funnels all of the VFRs,” said Luigs-Brown, who joined the FAA in 2008 and served as the NATCA PSP FacRep for seven years. “That’s really the only VFR path where they can go without climbing above 10,000 feet.”

Because these VFR pilots like to fly at 4,000 to 5,000 feet, they can come into conflict with aircraft using instrument flight rules on their approaches. That’s why Luigs-Brown scanned the radar as a SkyWest Airlines checked in with the tower for its visual approach to the runway.

“I saw a small blip on the screen,” he said. “It wasn’t even a primary return. … It was an instinct from staring at that radar for 10 years, keeping a scan up even though I was only talking to one or two airplanes.”

The CRJ200 regional jet was about 12 miles from Palm Springs when Luigs-Brown spotted the unidentified aircraft about five miles ahead of it. The transponder on the second aircraft wasn’t on, and the pilot wasn’t speaking to either PSP or Southern California TRACON. The FAA and NATCA created the “Take a Stand for Safety” campaign to address such scenarios.

Luigs-Brown issued multiple traffic alerts to the SkyWest pilots until they spotted the converging traffic. They reported it being “right about on our nose, same altitude.” The two aircraft passed within a little more than a quarter-mile of each other at that altitude.

Johnston praised his handling of the situation, saying that “his attention to detail, even in airspace outside of his jurisdiction, is inspired and exemplifies our mission, vision and values.”