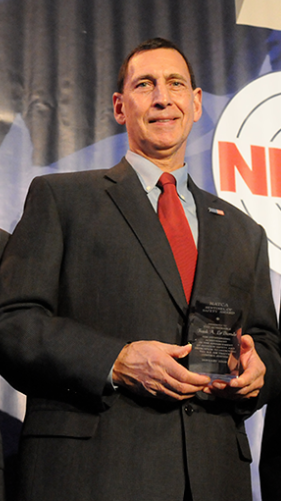 “Since his first election to the House in 1994, Chairman LoBiondo has been a true champion for the men and women, represented by NATCA, who serve the public as aviation safety professionals,” NATCA President Paul Rinaldi said. “Chairman LoBiondo recognizes and values the dedication and passion of the workers on the front lines of the aviation system, providing a strong, steadfast voice on Capitol Hill. Throughout his illustrious career, he stood shoulder-to-shoulder with NATCA’s members and, when necessary, selflessly defended us from our sharpest opponents.”

A former House Republican Labor Caucus Chairman, Chairman LoBiondo remains an outspoken leader for working union members and their families and he has been a champion for NATCA time and again. He worked directly with the Federal Aviation Administration (FAA) on NATCA’s behalf on many critical issues, including leading the effort to restore fairness to the collective bargaining process and by getting the FAA to return to contract negotiations with NATCA in 2009. He has never wavered in his support for NATCA’s positions on FAA reauthorization and our other legislative priorities.

“NATCA is grateful for Chairman LoBiondo’s support and strong leadership, and our long-standing partnership,” NATCA Executive Vice President Trish Gilbert said. “We look forward to working with him during the remainder of his term, as there are many important issues that we continue to face as an aviation community. We will miss him, we thank him for all of his work and service, and we wish him all the best in the next chapter of his life.”

Chairman LoBiondo’s leadership and accomplishments were formally recognized by NATCA in 2008, when he was presented the James L. Oberstar Sentinel of Safety Award (pictured below), NATCA’s highest honor for a member of the aviation and legislative communities, awarded to those who display outstanding achievement in the advancement of aviation safety. Since then, Chairman LoBiondo has continued to stand up and fight for the aviation community, so that NATCA and our members can ensure that the National Airspace System (NAS) remains the world’s safest and most efficient.