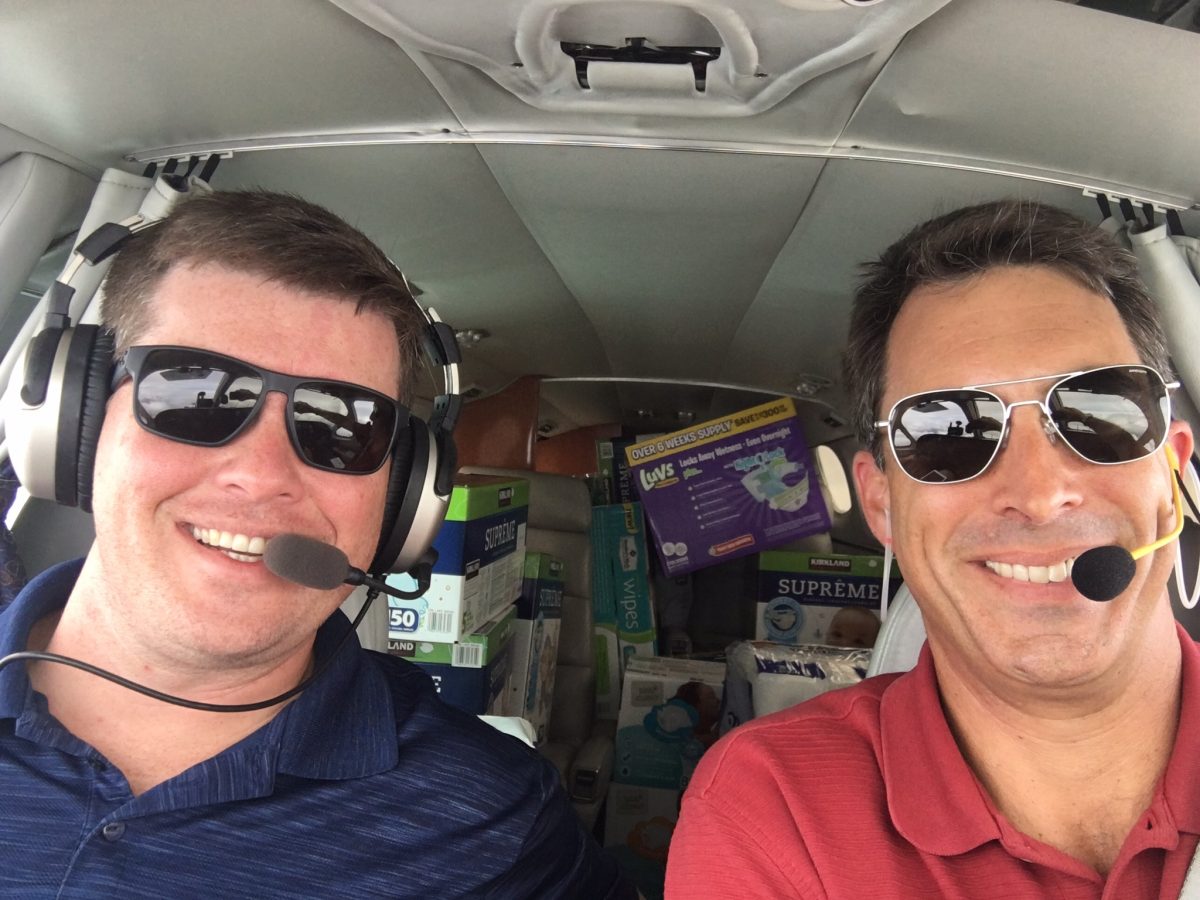 The National Aeronautic Association (NAA) honored NATCA member Brian Kelly as part of its presentation of the 2017 Public Benefit Flying Teamwork Award, created to honor volunteer pilots, other volunteers, and their organizations engaged in flying to help others. The award was presented on Nov. 29 at the NAA’s fall awards ceremony in Arlington, Va. Kelly is a veteran air traffic controller from Dallas-Love Field ATCT (DAL) and is also a pilot.

Kelly was recognized for his dedication and vitally important volunteer work with Operation Airdrop, one of the largest grassroots general aviation disaster relief groups that delivered supplies to areas in need after Hurricane Harvey struck Texas and Louisiana. Following Harvey, the group undertook nearly 400 missions, delivering 250,000 pounds of donated supplies to various small airports around the Houston/Beaumont, Texas area. They teamed up with the Central Texas community assistance organization Educated Angels and did 62 missions carrying over 27,000 pounds of supplies.

Kelly also coordinated for pizza to be delivered to Army National Guard soldiers at Hawthorne Field in Hardin County, Texas, and arranged for several truckloads of goods from Educated Angels to be delivered to various organizations, including the Salvation Army in Corpus Christi, Texas. 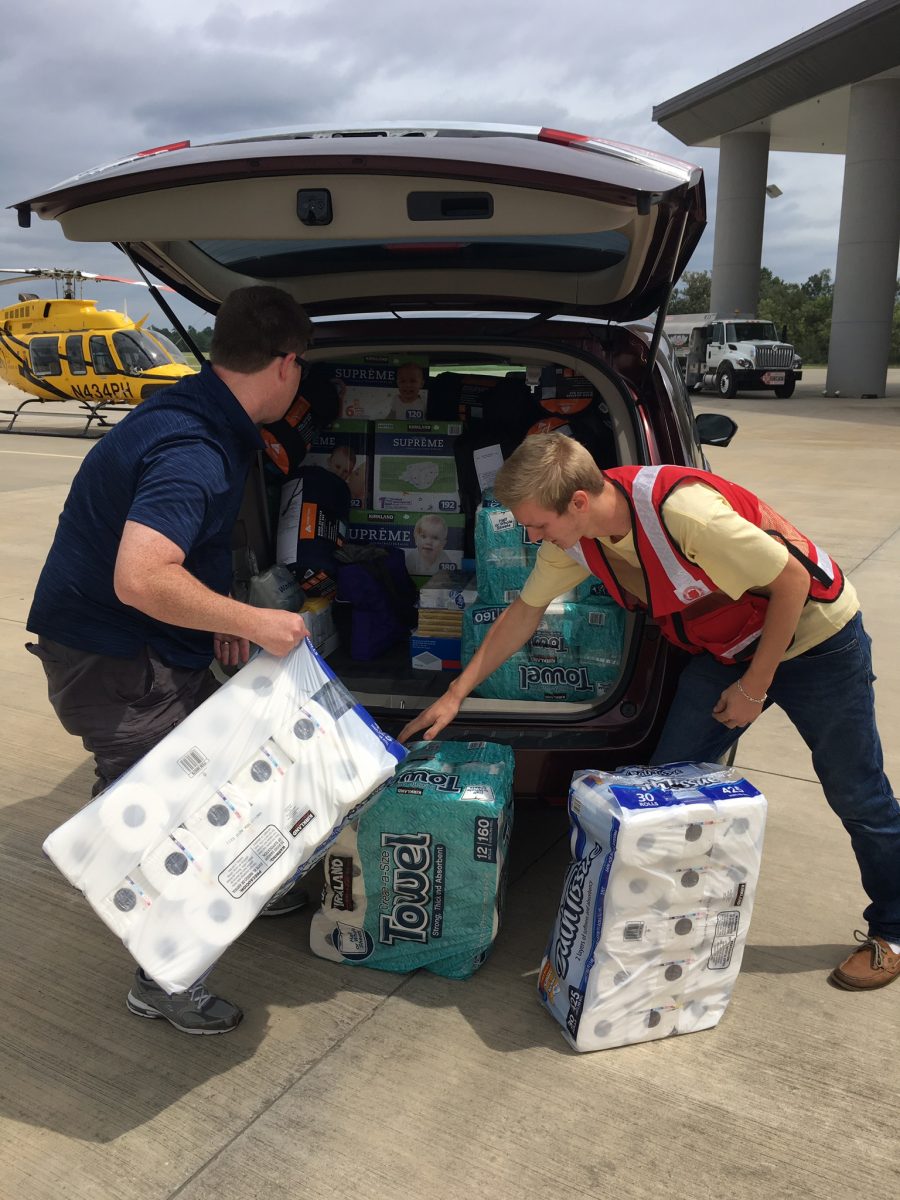 When Hurricane Maria hit Puerto Rico, Kelly’s group teamed up with Puerto Rico native and baseball Hall of Famer Ivan “Pudge” Rodriguez to get supplies to the island.

“We are incredibly proud of Brian, who is very deserving of this award for his dedication to help so many in need after the recent hurricanes,” NATCA Executive Vice President Trish Gilbert said. “Brian exemplifies the compassion, generosity, and desire to help others that is prevalent throughout our Union and which has been on full display during the continuing hurricane relief efforts. Brian and all of our NATCA brothers and sisters who have flown relief and supply delivery missions have made our Union and our represented-professions very proud.”

Operation Airdrop began on Aug. 30. The group was started by Doug Jackson and John Clay Wolfe. Jackson solicited the help of his friend and fellow pilot Robert Johnson (pictured top photo, right) to organize theirs and other pilots’ relief missions to Houston for Harvey victims. Johnson texted Kelly to ask about the air traffic control situation in Houston and get his advice about airspace and temporary flight restrictions. Before his FAA career, Kelly was a C130 navigator in the Air Force and spent time flying in support of the victims of Hurricane Katrina in 2005, so Johnson knew he would be aware of what was needed to help Houston. Johnson invited Kelly on his first flight to deliver supplies from Dallas to Conroe, Texas.

“Operation Airdrop quickly grew, and Brian stepped in almost immediately to run operations,” Johnson said. “He took personal vacation time from work and cobbled together a small team of dedicated individuals to coordinate the hundreds of volunteer flights carrying cargo and personnel to the Houston area. They took over a conference room at the Denton Airport to create an ad-hoc command center.

Kelly’s team fielded requests from people on the ground in Houston and also coordinated the “catchers,” who would actually receive the cargo, so the pilots didn’t just unload them on the ramp. “They, of course, also managed the volunteer pilots and planes and developed an operational plan each day of where to send the planes and what cargos were needed,” Johnson said.

“The logistical infrastructure that Brian and his team put together on incredibly short notice was simply amazing,” Johnson added. “Brian didn’t see his family for several days, and his team often slept on the FBO’s (airport fixed base operators) couches.”

First, I would like to express a heartfelt thank you to the National Aeronautic Association and Air Care Alliance for this opportunity to recognize the hard work of the thousands of volunteers that put their personal time and money into helping our fellow man in a time of great need.

A number of established and new organizations came together in a historic effort to deliver the necessary help to those affected by this year’s hurricanes Harvey, Irma, and Maria. No one organization could have done this alone. It took all of us coordinating together.

Our groups were able to help hurricane victims when no one else could due to flooded roads and highways. All we needed was 3 to 5 thousand feet of runway and we had supplies delivered, sometimes in as little as 4 hours from the time the request was received. General aviation did that. No other industry or organization could have made that happen, but we did.

We made connections with airport managers, charities, and pilots from nearly every state in the country. We even provided assistance to the National Guard on the ground. We went from six degrees of separation to averaging one or two.

The key to our success was true teamwork and building relationships. We trusted each other. We relied on each other. We believed the best in each other and that allowed us to make things happen quickly.

Everyone reached out, and freely gave their time and resources. We all shared our information on nightly phone calls, emails, and social media. We didn’t do this for the money or the recognition. We did it because we all had a desire to serve.

We were able to connect our separate grassroots networks to achieve a common goal of quickly delivering essential supplies, and we accomplished that using every airplane from a Long EZ to a King Air.

I am humbled to be able to accept this award on behalf of the countless men and women who did not hesitate to answer the call for help from their fellow man.

They truly showed how to love your neighbor as yourself. I would be remiss if I did not acknowledge that these servants were sent by God to put His love on display.

In the end we were able to demonstrate that general aviation is truly an untapped strategic national resource.