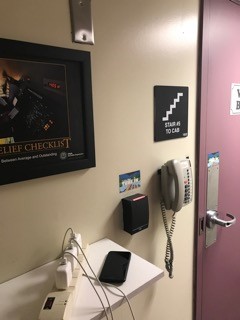 Air traffic controllers at one of the busiest towers in the world are keeping runway incursions to a minimum — thanks in part to the FAA-NATCA Turn Off Tune In campaign. Runway incursions have steadily dropped at Chicago O’Hare International Airport in the last three years.

Forty-two incursions were recorded in 2015. Last year, that number dropped to 25. And this year, having managed more than 700,000 airplanes thus far, the tower has seen just 15. O’Hare Tower (ORD) Air Traffic Manager Bob Stone and NATCA FacRep Dan Carrico couldn’t be prouder of the workforce. Stone and Carrico shared the good news during their weekly safety discussion. The weekly briefings include discussions about the danger of electronic distractions.

“We highlight these bright spots we’ve been able to achieve,” Stone said. “I think we all need that pat on the back sometimes because we’ve been pushing really hard to move the safety culture forward, and these guys are doing awesome.”

At ORD, however, controllers take a zero-tolerance stance and have the safety record to prove it. Carrico sees the distraction-awareness campaign as one of several key pieces to enhancing the safety culture among controllers.

“I think the advent of the local safety council, along with voluntary reporting and Turn Off Tune In have brought awareness to issues that impact safety,” Carrico said. “It’s a multi-pronged approach with positive reinforcement. Our controllers pay attention to these things and we’re seeing good results from it.”

O’Hare recently implemented new standard operating procedures that require airplanes to taxi behind other aircraft waiting for takeoff clearance. This new rule significantly reduces the chance of incursions. Air Traffic and pilots came to the agreement on the procedures at a recent runway safety meeting.

This same philosophy is applied in the tower cab when it comes to using cellphones. All controllers leave them outside the tower cab, and a charging station outside the door with Turn Off Tune In signage serves as a great reminder.

“Our controllers are not talking or texting on their phones,” Stone said, “and I think that has helped us move the needle forward in reducing runway incursions and improving safety all around.”

This story has been published jointly by the FAA and NATCA.