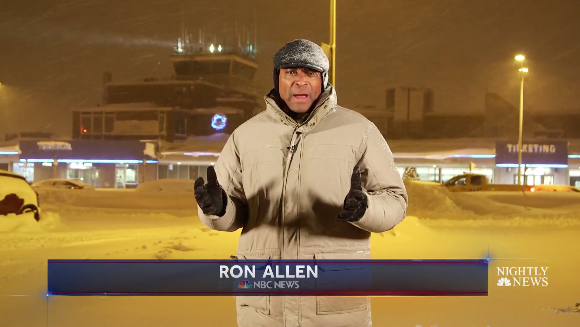 Erie Snowstorm Brings Out the Best in Aviation Safety

Even for a community like Erie, Pa. (ERI), which is well-equipped to handle heavy, lake-effect snowfalls, the unprecedented dumping of snow they received last week stunned residents, including NATCA members who watched in awe from the tower.

“We were watching and it was just like, ‘well, it’s gotta quit eventually,’” said ERI FacRep Cole May, who just took over as FacRep on Jan. 1 and has worked at the facility for two years since beginning his FAA career.

May grew up in southeast Indiana, near Cincinnati. Before ERI, he worked as a DoD controller in Cheyenne, Wyo. So he’s used to major winter weather. But last week was off the charts. Erie received a record-setting December snowfall total of 121.3 inches, including about seven feet of snow from Dec. 24 through New Year’s Eve, according to the National Weather Service in Cleveland.

There are 16 certified professional controllers at ERI, with another five in training. May praised the efforts of members to not only make it in to work during a time when local officials declared a road emergency, but to look after each other as well as other members in their local and their own communities.

“Our members did an amazing job,” May said. “We were well staffed all week. It was kind of remarkable. Operationally, we were able to keep things running smoothly personnel-wise, with the only limitations coming from weather-impacted equipment.”

While the severe conditions caused many flight delays and cancellations, controllers provided important ATC services throughout the storm and afterward. That included radar service for helicopter operations, ATC services for aircraft using ERI’s satellite airports (Jamestown, N.Y., Corry-Lawrence, Pa., and Northeast Ohio Regional), keeping watch for any emergencies that could arise, and keeping extra eyes on the airport plow crews that were operating non-stop for several days.

“There was consistent helo traffic, several times an hour, into the hospitals,” May said.
“A lot of our work was also general aviation overflights and aircraft that are descending over the lake and landing in Toronto’s airspace.”

Another member, Steve Flowers, selflessly drove back from his hometown of Buffalo to ensure that other members would not get called in for overtime on Christmas Day.

“We have a great facility,” May said. “We have a good mentality. I am pretty proud of everybody.”