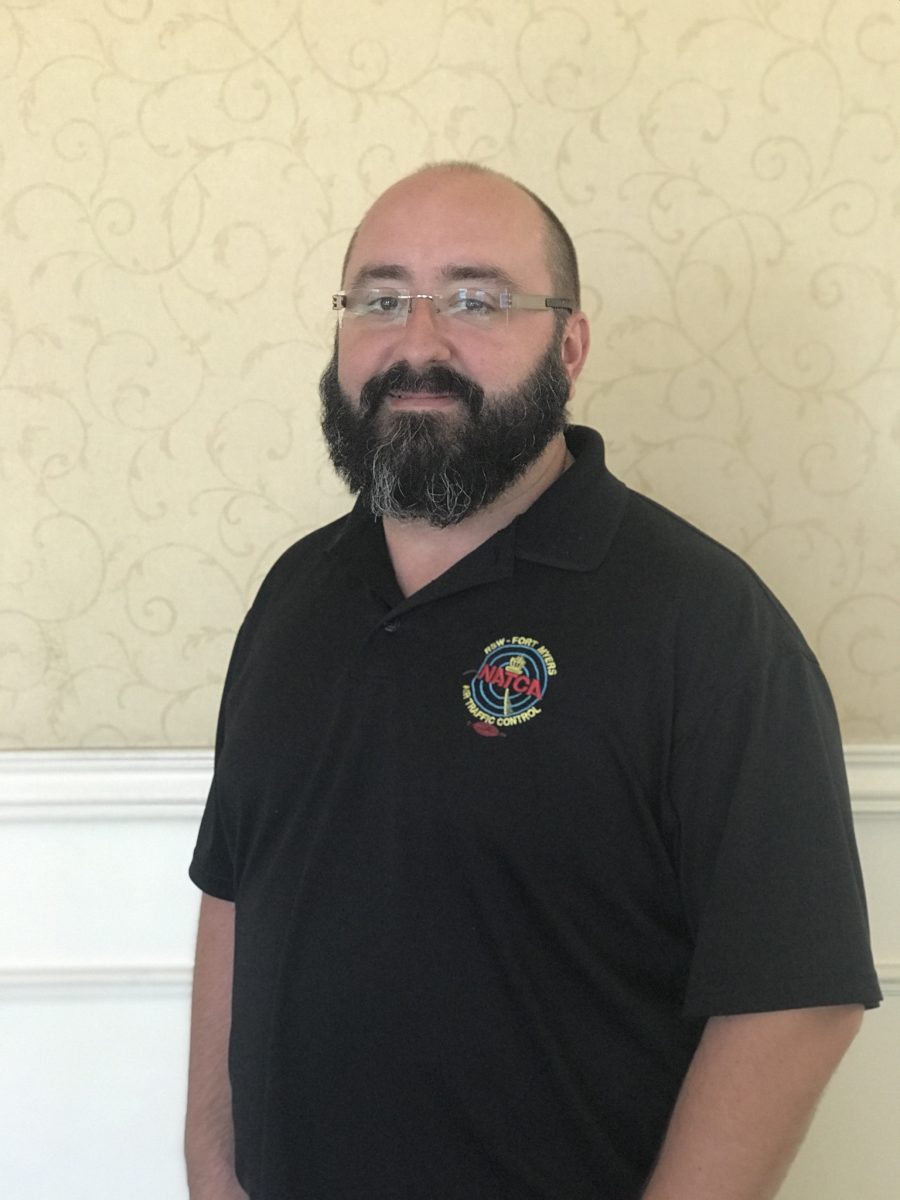 In December of 2007, I accepted my offer letter from the FAA to be an air traffic controller assigned to Cape Tracon (K90), located on Cape Cod in Massachusetts. I began training in Oklahoma City in January of 2008 and got to the facility in March of 2008. I completely certified in the summer of 2009. This is where my passion for NATCA began. My first NATCA event was NATCA in Washington, and it was a great event. I also started to take NATCA courses like the Collective Bargaining Agreement Training, Basic Representative Training, and Legislative Activist training. I also worked on a number of workgroups, including airspace and procedures and LOA (letter of agreement) changes. I joined the K90 E-board in January of 2010 as a secretary and remained in that position until I transferred to Fort Myers, Fla. (RSW) in November of 2011.

I arrived at RSW and immediately began training, as the facility was incredibly short-staffed. I certified in the tower in December of 2011 and then certified in radar by April of 2012. I have become an activist not only for the facility but for a stronger NATCA. In late 2012, I worked with the current E-Board on a structure to carry our facility forward.

Born and raised, other places of living:
New Bedford, Mass.

Education:
Bachelor’s Degree in Political Science and Economics from University of Massachusetts, Amherst.

Family:
My parents, Jose and Maria, were born in Sao Miguel in the Portuguese archipelago of the Azores. As a child, my mom was raised in Brazil. Both of my parents immigrated to the United States in their early teens. They were factory workers for over 20 years and instilled the commitment of hard work and education in my brothers and me. My father pursued his dream and eventually became a successful business owner. I have two older brothers, Sergio and Claudio.

Q: Do you have any family members who were involved in unions?
A: Yes, both of my parents were union workers in the textile industry.

Q: How did you get involved and what are you involved in with NATCA?
A: My first involvement in NATCA was Basic Rep. Training when I was at K90. With my background in Political Science, I was asked to be the legislative representative for the facility. I then became secretary. When I transferred to RSW, I certified and have been the FacRep for RSW since 2013. I currently work on the TAMR (Terminal Automation Modernization and Replacement) team as a subject matter expert and as a NATCA Training Representative. I’m also involved in assisting the Southern Region (NSO) on the labor relations team.

Q: Are there challenges associated with being FacRep?
A: My first two-year term as FacRep was a massive challenge. We had a workforce that did not want NATCA to “rock the boat,” union membership at 66 percent, and a management team that was not adhering to the Red Book. We immediately began educating our membership on the CBA and explained the importance of upholding all parts of the CBA. We also began engaging management in an attempt to collaborate on making changes. Unfortunately, our management team was more interested in preserving its control. We immediately reached out for help. There was a great deal of NATCA support given to us in an attempt to collaborate. In addition, a small team was brought out to RSW to give us a crash course on Interest Based Communication with all of our members. In addition to this, I also took an official Collaborative Skills Training and Interest Based Communication course. It took nearly three years, but we eventually got our membership numbers up to over 90 percent. We have a great collaborative relationship with management now and we are developing strong NATCA activists. I’m extremely proud to represent this dedicated team of aviation safety professionals.

Q: What would you like to get involved in that you haven’t already?
A: I have been blessed with all the opportunities I have been given. I’m here to support the organization in whatever the leadership sees fit.

Q: Out of all your involvement within NATCA, what speaks to you the most?
A: Working on the TAMR team has been great. Not only the team, but the collaborative approach to solving issues and ensuring this massive undertaking is a success has been fun. There are so many groups and resources that must work together to ensure that every site is a success and that we meet our objectives. It’s pretty remarkable.

Q: Do you have any hobbies or any other activities you enjoy outside of NATCA?
A: I love watching a live hockey game.

Q: Has there been a favorite moment for you while at NATCA?
A: My first Convention. When you see the business of the organization in motion, it’s impressive.

Q: Do you have any advice/tips/messages for members who would like to get involved?
A: Speak up and tell your leadership that you want to be involved. There will be sacrifices along the way with your time. Take advantage of any training or event you can attend. Finally, don’t ever believe that you can’t make a difference in this organization. No matter what level facility, you can make a difference.

I absolutely cannot stand: Complacency.
My local hotspot is: The Fort Myers Brewing Company.
The best place I’ve ever travelled to was: Crete, Greece.
My favorite sport is: Hockey.
My favorite sports team that I live and breathe is: The Boston Bruins.
In my spare time, I enjoy: A good craft beer.

Prior to joining NATCA, Costa accepted a position with North American Airlines to support the Civil Reserve Air Fleet mission for the military following 9/11. During his time at the airline, he worked on a number of workgroups and was one of 12 employees selected to certify the B-767 for use by demonstrating to the FAA it could successfully perform emergency evacuation procedures for both land and water. Additionally, it needed to perform a proving run where the airplane was flown for 25 hours and both the flight deck and cabin were continually tested by the FAA.

In 2005, the airline’s inflight employees voted in the Teamsters as their exclusive bargaining unit representative. Costa became very active in organizing pre-contract meetings with the employees. In 2006, he ran and won a shop steward position with Local 25. However, before taking office, the company notified the local that the Boston station was closing and that they needed to move to New York within 10 days. He was unwilling to make the move.

He immediately began a search for a new career and decided that he would apply to the FAA as a cabin safety inspector. It was during this application process that Costa also submitted his application for air traffic controller. The rest is history.