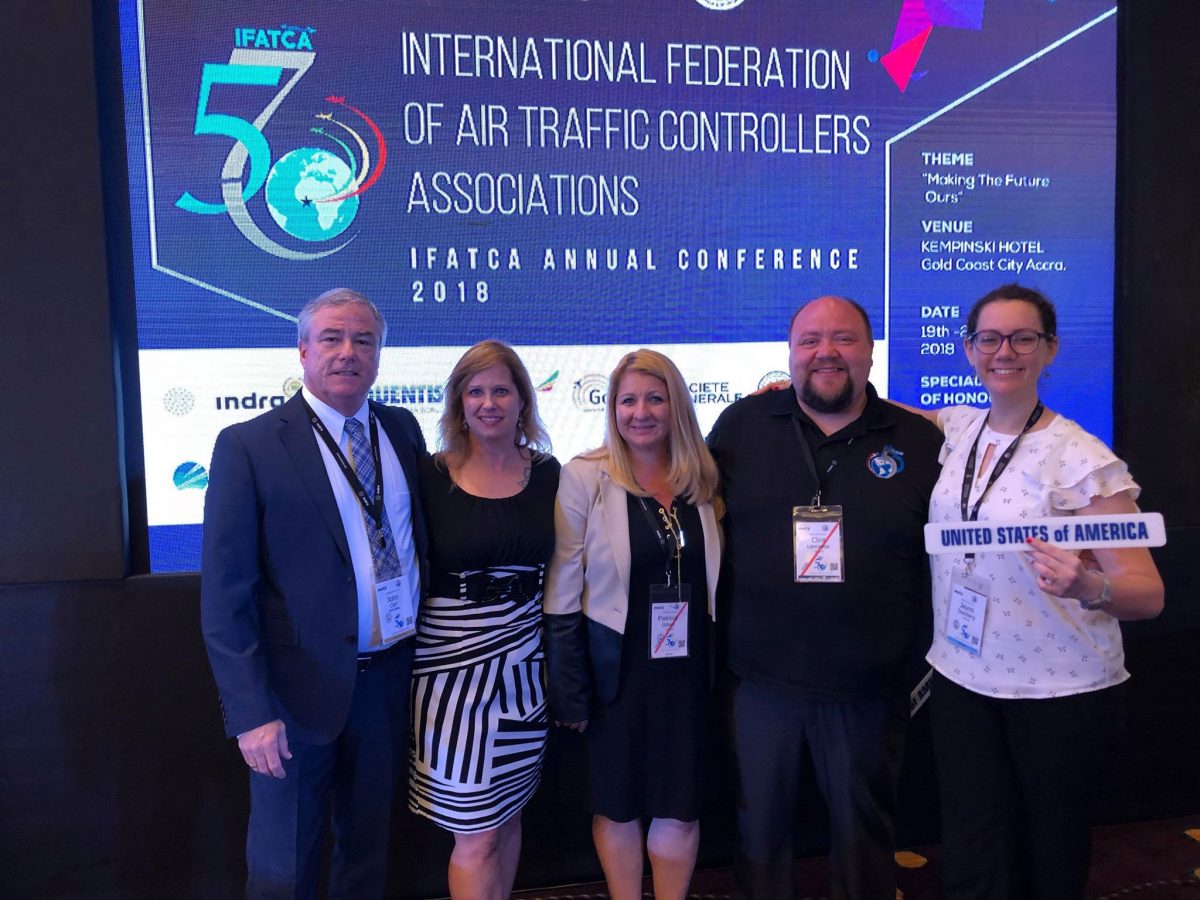 The Editor would like to thank NATCA Washington Center member Jaymi Steinberg, who serves on the Technical Operations Committee (TOC) of the International Federation of Air Traffic Controllers’ Associations (IFATCA), for her contributions to this article on IFATCA’s Annual Conference held in Accra, Ghana, March 19-23.

The IFATCA Annual Conference is the annual general meeting of the Member Associations (MA). Directors, and delegates from 130 countries convene to provide direction to the Executive Board and to determine the rules and policies of the Federation. Twice a year, the TOC comes together for a three-day meeting to discuss the progress and the desired outcome of working papers.

On the first day of the conference, IFATCA President and Chief Executive Officer Patrik Peters provided an introduction to the structure of the Federation. IFATCA Representative to the International Civil Aviation Organization (ICAO) Air Navigation Commission J.F. Lepage then taught the audience about how ICAO works, involving SARPs (standards and recommended practices) and annexes.

IFATCA Executive Vice President of the European Region Tom Laursen was joined by his counterparts and presented information on training courses, safety, Critical Incident Stress Management (CISM), and competency-based training (CBT). IFATCA offers several courses for free, on demand. They are presented in the English language, and are developed by utilizing Federal Aviation Administration (FAA) and OSU data, on topics including aviation, CBT for air traffic controllers, thinking about safety, investigation, and safety cultures.

Various types of incidents that may require CISM were discussed as well, along with the various signs of stress that may be encountered in the workplace.

Also on the first day, Peters discussed the roles of representing MA at the conference. The importance of participation was emphasized. Robert’s Rules of Order were briefly discussed to ensure the system runs smoothly and election protocol was covered.

On day two of the conference, attendees were honored with the opportunity to see government officials and the President of Ghana, Nana Addo Dankwa Akufo-Addo, give opening speeches. The future outlook – such as controller interaction with potential space control – was discussed.

Peters then reported on the state of IFATCA, stressing good cooperation and coordination between members. There have been extended efforts to reach out with training opportunities such as English proficiency. All regional meetings were successful and highly productive. IFATCA continues to have excellent representation in the Air Navigation Commission (ANC) by Lepage. Continued efforts to sort out the IFATCA magazine publication needs were also addressed. Staff shortages worldwide have provided challenges. Improvements in just culture have also shown through in court cases, such as in Uganda.

Aireon then provided a presentation on Space-Based ADS-B (Automatic Dependent Surveillance-Broadcast). ADS-B payloads are within satellites launched by SpaceX. Currently, there are 32 satellites providing data with more planned for launch soon. By the end of 2018, there will be 100 percent coverage of aircraft equipped with ADS-B. The area that is covered by ADS-B satellites is actually greater than anticipated, resulting in many areas of the planet having triple coverage via satellite.

On day three of the conference, representatives from Zambia, New Zealand, IFALPA (International Federation of Air Line Pilots’ Associations), Australia, Italy, Georgia, and the RTO (Remote Tower Operations) Group provided reports and recommendations on a variety of topics ranging from drones to cyber security to due regard in international airspace. Recommendations were discussed and some were accepted by the IFATCA body.

On the last day of the conference, IFATCA committees gave closing reports and IFATCA awards were given to outgoing EVP of Finance, Scott Shallies, and outgoing EVP Professional Eric Risdon. The Scroll of Honor was awarded to Editor Philip Marien for his work on The Controller magazine. The delegation of Ghana also presented several gifts to members of the Executive Board. The Ghanaian team introduced their ranks that worked tirelessly for the conference. Then, the IFATCA flag was officially handed off to next year’s host, Costa Rica.

Peters, in his closing remarks, asked attendees to support all members, especially those in need like in Yemen and Uganda. Peters said he looks forward to the future and modernization across global aviation systems. Moving forward, he added, IFATCA members will continue “making the future ours.”