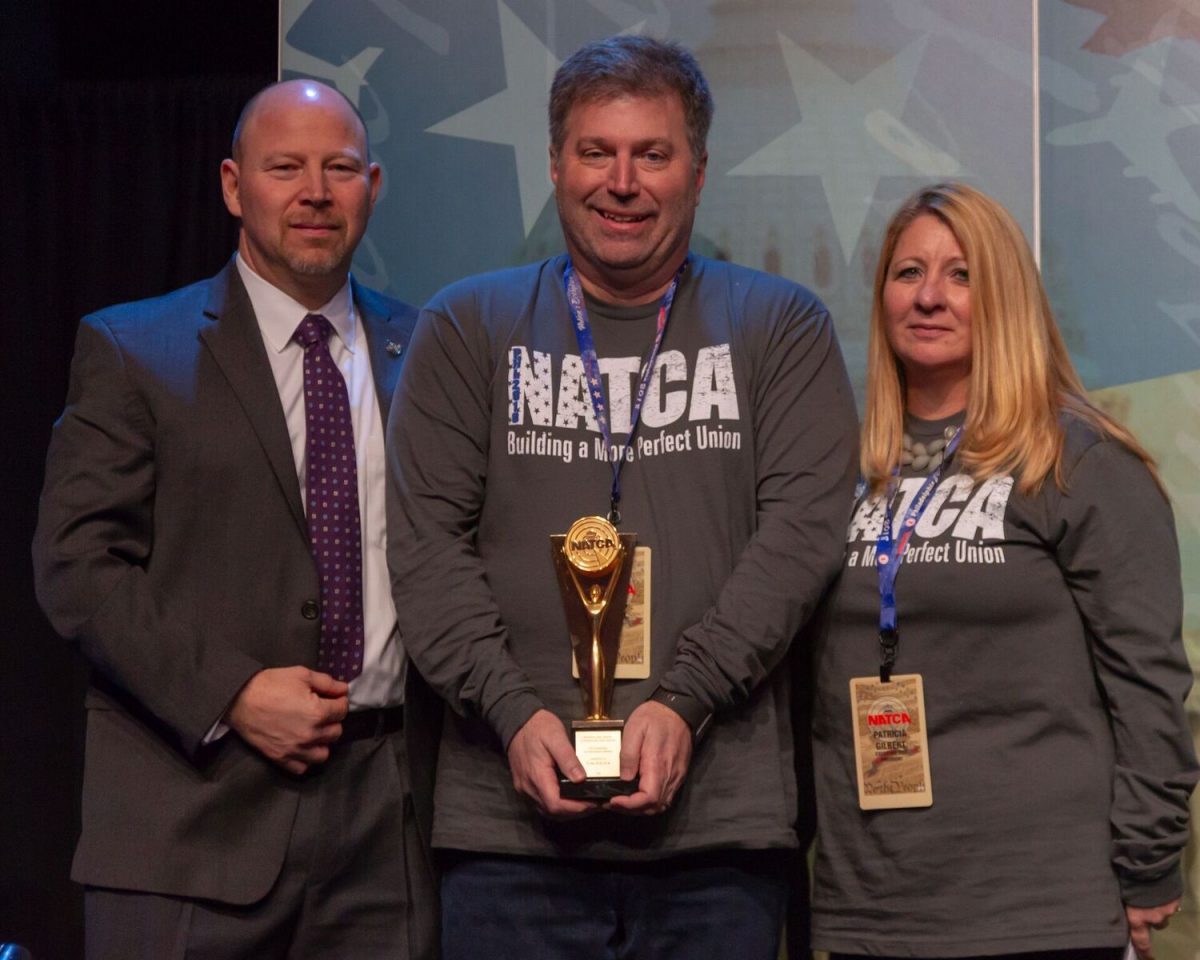 At each NATCA convention, union members and employees who have done an exceptional job representing NATCA values are honored with the Tim Haines Memorial Award of Honor and Distinction, otherwise known as the “Timmy Award.” This prestigious award was originally named the “Natty Award,” first presented by former President John Carr at the 2002 NATCA Cleveland Convention, then at the 2004 St. Louis and the 2006 Boston Conventions. The “Natty Award” was changed to the “Timmy Award” during the 2008 Miami Convention in honor of Haines, who, with hard work and dogged determination, successfully implemented a reclassification project into NATCA’s third contract, the Green Book.

Starting as a controller and then facility representative at Pittsburgh Tower (PIT), Haines was elected Eastern Region RVP in 1991. Haines is remembered as a NATCA member who never backed down. Because of this staunch dedication to his union, NATCA appointed him to a reclassification project that would revolutionize the way in which members of the union are paid fairly. Many did not believe this project would be successful and thought the FAA would never agree to it. But Haines never faltered in his resolve to protect his profession and the well-being of each and every member of his union.

After 18 months and 200 facility site visits to observe air traffic operations, Haines and his team collected loads of data and presented their proposal at the 1994 convention in Tampa. Shortly afterwards, FAA managers came onboard and the project was put into effect in the 1998 Green Book.

Haines passed away in 2006 and this award recognizes members of the NATCA family for their relentless dedication and Haines-worthy commitment to NATCA.

The NATCA members below were honored on April 20 at the 17th Biennial Convention in Philadelphia with the Tim Haines Memorial Award.

TOM ADCOCK (above) has been a part of this Union and his profession for all of NATCA’s three decades of history. He began his FAA career at Atlanta Center in 1985 and worked as a controller at Miami Center (ZMA) for 27 years – starting in 1987 – before becoming an Article 48 rep. He served as facility vice president at ZMA twice, the most recent time being 2009 to 2012. There, he was a training support specialist for two and a half years. He served as the local’s training liaison for 18 years.

Adcock is currently a member of NATCA’s National Safety and Technology Leadership Council and serves as NATCA’s National Training Representative. He leads NATCA’s collaborative efforts with the Agency in the area of developing future training for air traffic controllers. There are dozens of NATCAvists who work on training projects and this dedicated leader coordinates all of those efforts. Recently, he led the NATCA team on the collaborative work with the Agency to develop a TETRA course, a 20-day training course designed to help with a national workgroup’s plan to develop a program to aid with staffing at large TRACON facilities. TETRA stands for Ten Eleven Twelve Radar Assessment and provides training and the evaluation of candidates to identify successful performance in a high fidelity simulation. 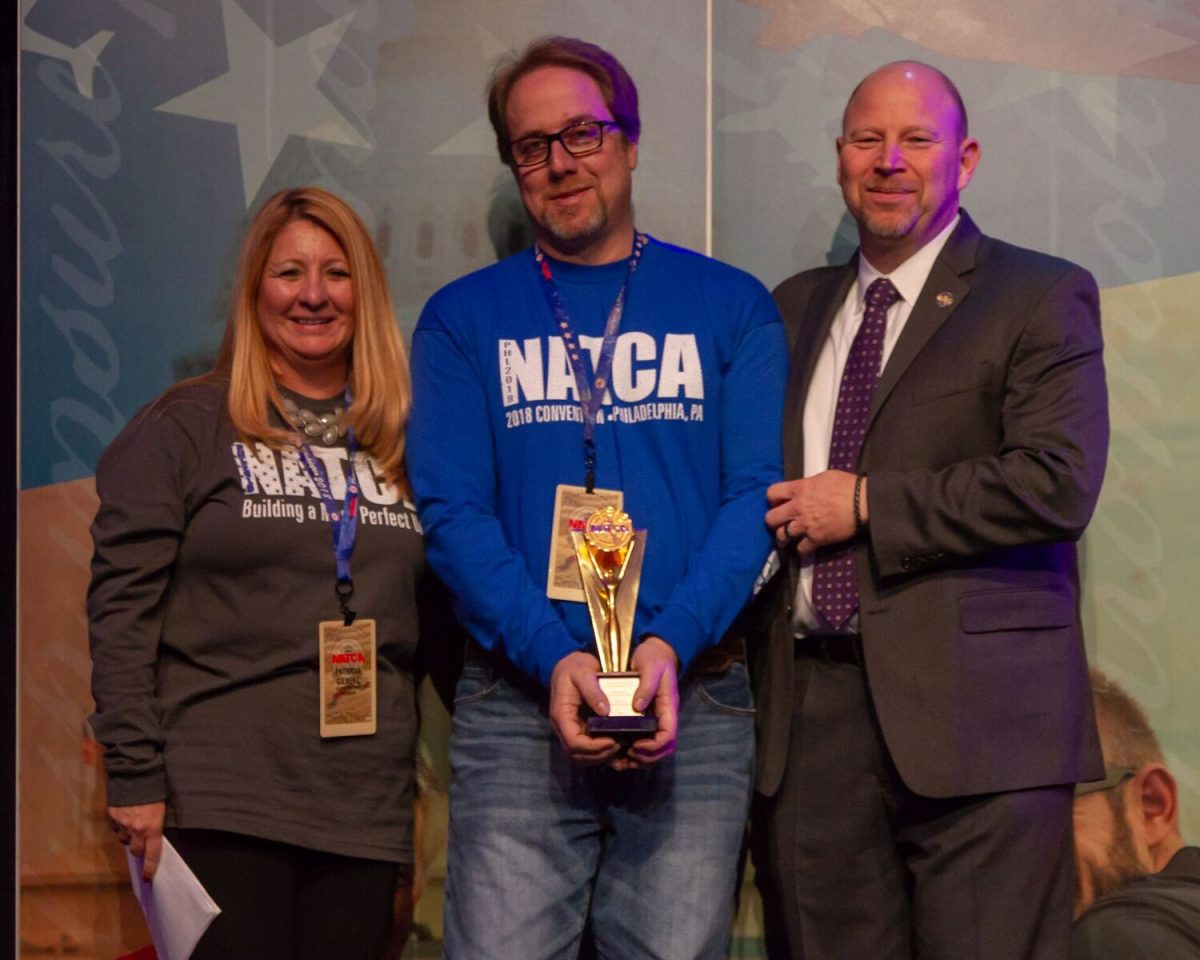 PHIL HUGHES (above) has spent his whole career in the New England Region and proudly calls Boston TRACON his home facility. He has served the Union at A90 as its vice president for four years and its secretary for another two. This year, he celebrates his 30th anniversary as an FAA air traffic controller.

One of his true gifts that he has shared with NATCA is his passion for growing and strengthening the Union through organizing. He has served as member of the NATCA Organizing Committee since 2014, also representing the New England Region in that role.

But where Hughes has perhaps made his longest-lasting impression is the masterful role he has played in co-leading the NATCA-FAA collaboration efforts with his counterparts on the Agency side. Collaboration has improved the safety of the system and has reached a level of maturity that makes it sustainable and the way to do business. Our award winner has led with passion, dedication, and strength to push us to greatness. He’s traveled hundreds of thousands of miles to serve this Union by taking collaboration to every region and every corner of the NAS. 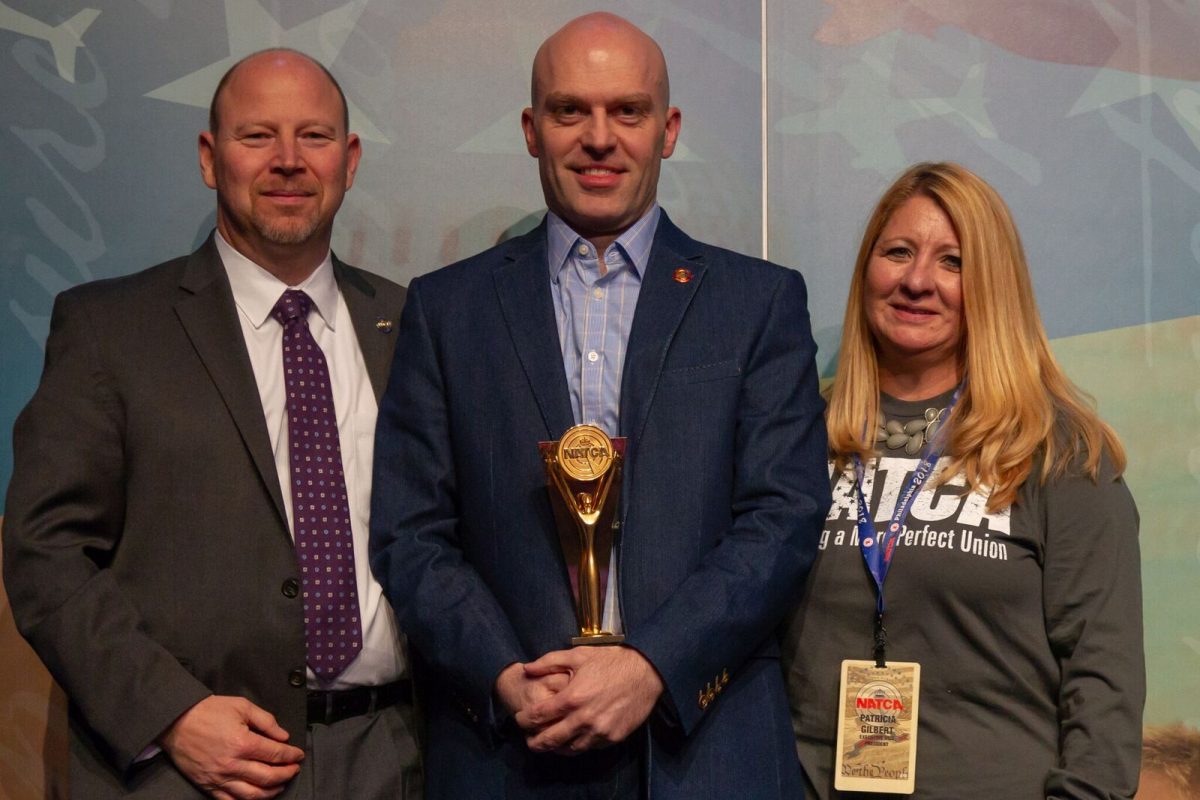 RICHARD KENNINGTON (above) has been a controller for 19 years and has served as the FacRep at Portland Tower (PDX) since 2007. He became a pilot while working as an aircraft dispatcher for a large aviation training company prior to starting his career.

Kennington has served as the Northwest Mountain Region’s Legislative Representative to the National Legislative Committee since 2013. He helps teach our Legislative Activism classes, where he conveys his passion for legislative issues and representing our members in the best most professional way possible with members of Congress and their staffs.

He also has an active interest in international air traffic control relations and helping our members understand what is happening in other countries. He served as master of ceremonies when NATCA hosted the 2016 Annual Conference of the International Federation of Air Traffic Controllers’ Associations. At the NATCA 16th Biennial Convention he co-presented on the details of the Canadian air traffic control system. He had visited some Canadian facilities and reported back to the membership on what he learned. 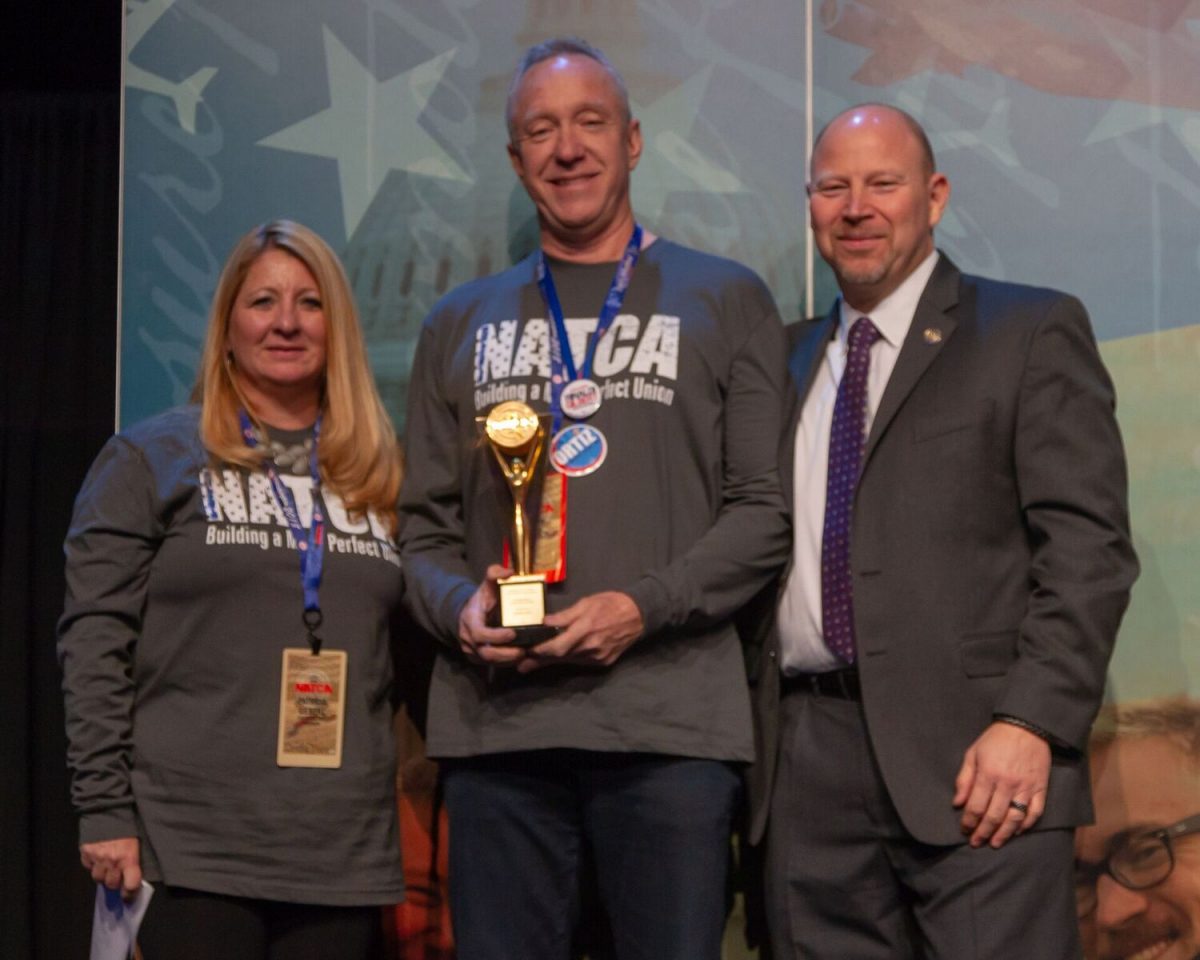 JIMMY LAKE (above) was a controller from 1989 to 2016 and now works as a staff specialist at the Honolulu Control Facility (HCF). He served as the local Union chapter Vice President for several years. Then he served as FacRep at HCF.

Lake also served the Union with great honor and distinction for many years as NATCA’s legislative representative for Hawaii and the Pacific. He made many trips to Washington, D.C., to represent his facility and his region on Capitol Hill, and helped to educate and brief members of Congress on NATCA’s key issues. He learned the importance of building relationships. He also was our National OJTI Workgroup lead, and did a tremendous job in a very important position as NATCA focused more on training. 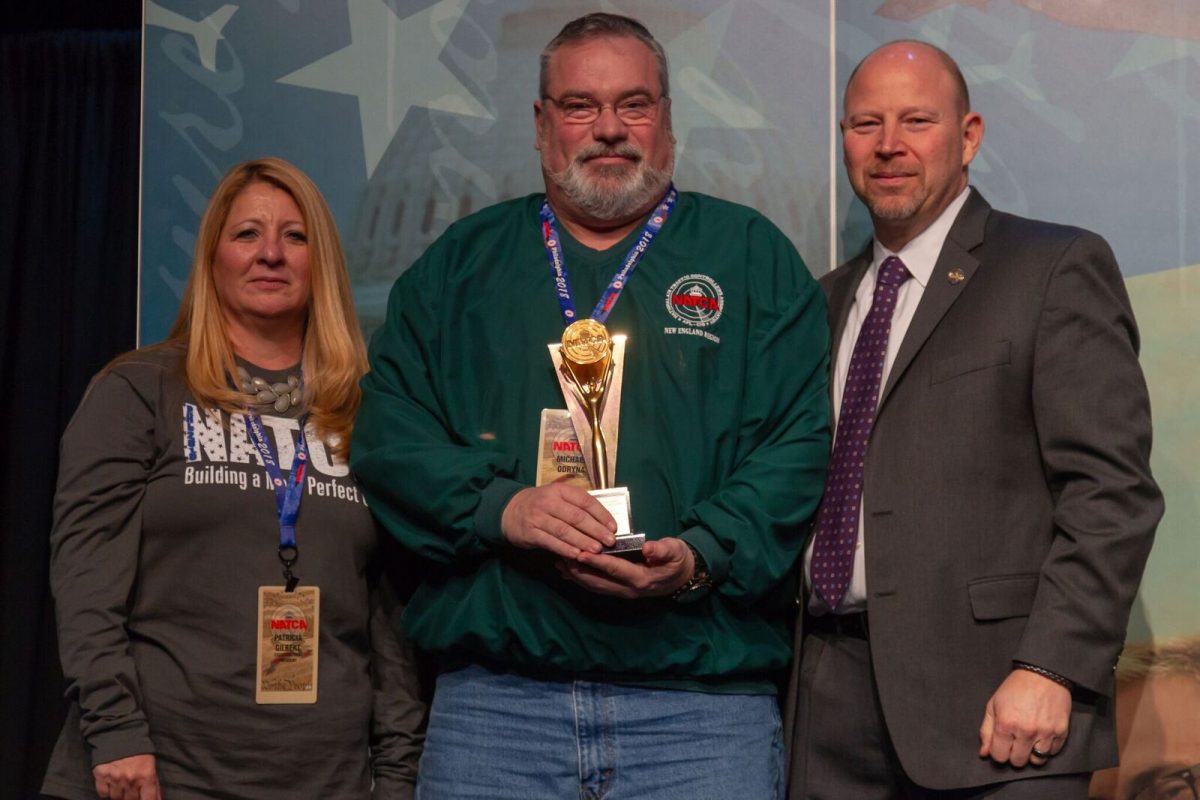 MIKE ODRYNA (above) has been a proud Union member since 1989. He’s a veteran air traffic controller at Boston Center and has had a 35-year career in the FAA. He has represented the New England Region on Occupational Safety and Health Administration (OSHA) matters since 1997 and has chaired NATCA’s OSHA Committee since 2004.

Odryna has shown an incredible determination and passion for the safety of all of our FAA workplaces. At the end of the day, it always comes down to safety. In order for all NATCA members to do their jobs well in protecting the safety of the National Airspace System, they must be able to count on a safe workplace. Our award winner has worked tirelessly for safe drinking water and air quality compliance with all OSHA standards and regulations, and full compliance with our contractual language on OSHA, which is Article 53 in the Slate Book, Purple Book, and Light Blue book CBAs.

Odryna’s passion for safety and health has also extended into heart health. He has led our efforts to expand the number and use of Automated External Defibrillators and each year honors a facility with the Helping Hearts Award to recognize notable achievement in the training of employees in using AEDs. 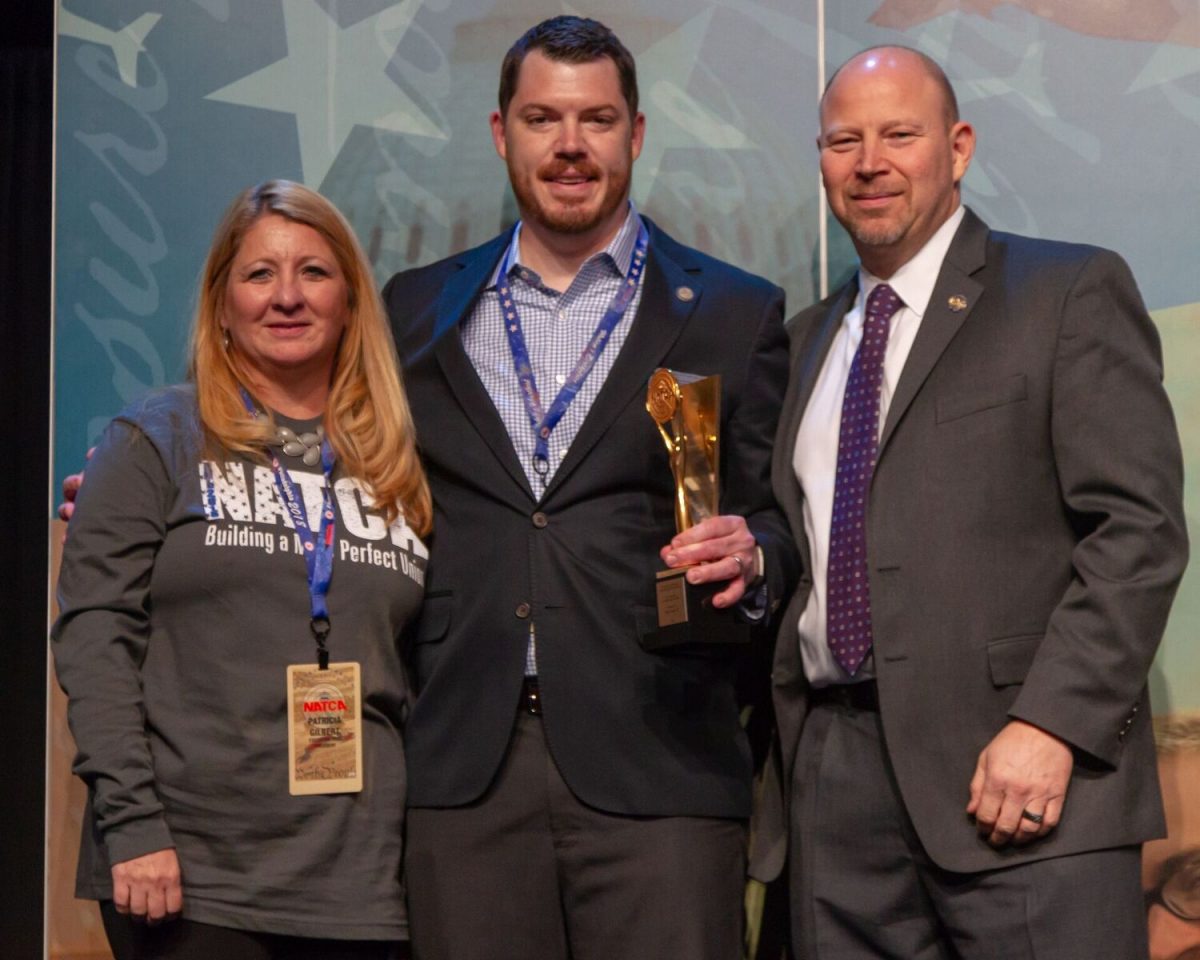 RYAN SMITH (above) has distinguished himself in extraordinary ways during not one but two different terms of his employment with the NATCA National Office in Washington, D.C. NATCA first hired him in 2005 for the position of Associate General Counsel. He was a valuable part of the NATCA team through 2012. He developed a strong passion for not only fiercely defending our members but for protecting labor, the law, and collective bargaining.

He left NATCA to pursue a new life chapter in Florida but in June of 2015, he returned to accept the position of Director of Labor Relations. NATCA needed someone who was familiar to the Union and its issues and its members at a very critical moment in our labor relations history – NATCA was just about to begin negotiations with the Agency on what would become the Slate Book contract for our ATC-TMU-NOTAM-and Flight Service bargaining units.

Smith was a key member of the Slate Book contract negotiating team. NATCA continued to build on the road of success and collaboration that NATCA and the FAA had developed over the previous several years and continue to move both the Agency and the aviation system forward. 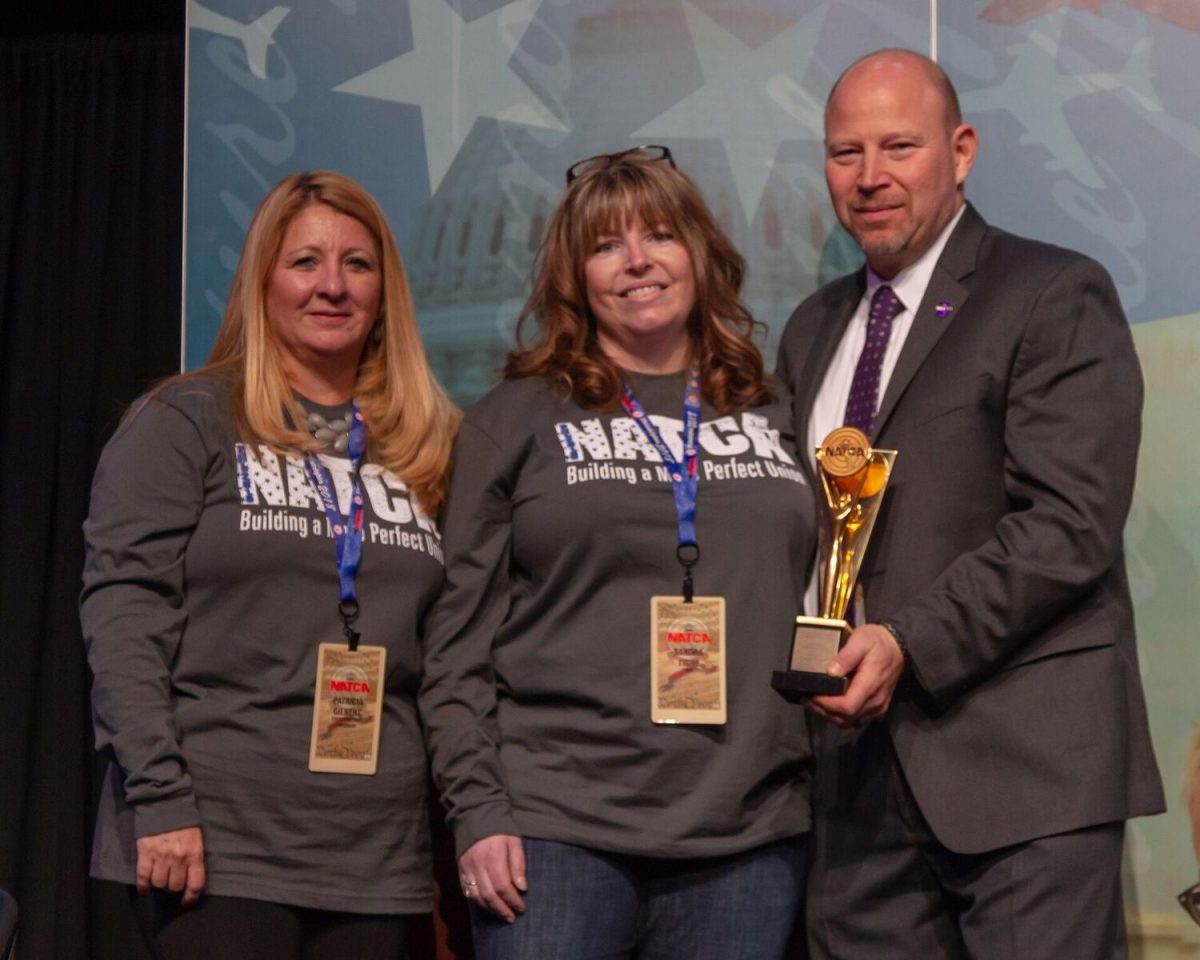 SANDY TIGHE (above) served as a member of Minneapolis Center’s local’s e-Board, in the position of Secretary, from 2004 to 2014, and served as the facility’s Reloaded representative from 2008 to 2011. She has served on the NATCA National Reloaded Committee since 2014 and as Great Lakes Region Reloaded Representative since 2016.

Tighe worked with the Reloaded Committee to design a class for the membership about How to Build a Stronger Local. This interactive class was designed to enhance the strength of your local by emphasizing the importance of teamwork, education, and communication. She also served on the 2014 NATCA Minneapolis Biennial Convention Planning Committee. That is where she really showed how incredibly valuable she is as an event organizer and planner, particularly for our Biennial Conventions, NATCA in Washington, and Communicating For Safety, working with Kelly Richardson and our special events staff members, along with our event committees.