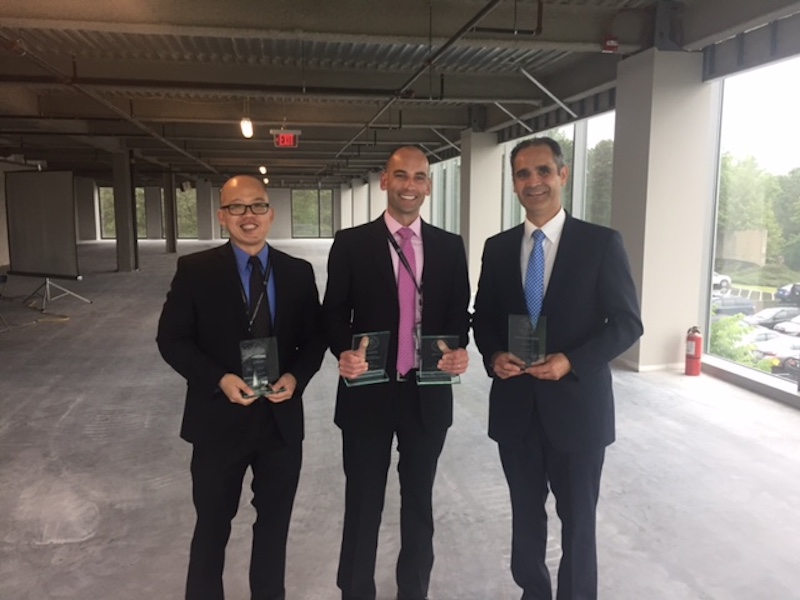 Several NATCA members from the New England Region who worked on the successful realignment of Cape TRACON (K90) into Boston TRACON (A90) were honored this week with the Teamwork Award at the New England Regional Administrator’s Awards Program. Additionally, one of those members, Jonathan Stanton (Engineers New England, ENE), was honored with the Program Excellence Employee of the Year Award.

The Teamwork Award recognizes a team/group that has demonstrated a high level of quality by using the shared skills and experience of team/group members.

K90 has been located on Joint Base Cape Cod in an old, World War II-era building since the 1950s. K90 is a critical facility in the New England Region, completing over 146,000 operations annually while controlling the airspace over Cape Cod, Nantucket, and Martha’s Vineyard.

In 2014, the Section 804 collaborative workgroup selected K90 as the first potential transfer site to undergo realignment analysis. While K90 provided valuable services to the NAS throughout the years, the facility’s age and condition made it a good candidate for realignment. The collaborative workgroup determined that K90 would be merged into A90 located in Merrimack, N.H. Planning for the merge began in 2016.

Merging a well-established TRACON into another requires a great deal of planning, coordination, project management, and unique technical knowledge of various NAS systems, including how those systems interrelate, according to both NATCA and FAA team members on this project. For example, short-range radars located on Nantucket and Joint Base Cape Cod must be integrated into the Standard Terminal Automation Replacement System (STARS) platform at A90. Four remote Air Traffic Control towers must have their TRACON services transferred without interruption. Consolidation involves moving frequencies, reprogramming voice switches, and reconfiguring the consoles at A90. Airspace consolidation is also required. For this project to be a success, collaboration and teamwork was critical at every level.

Throughout the duration of the project, the K90 Relocation team leads met regularly to create and maintain the project schedule. Action items were generated and tracked by the group and status updates were provided to the stakeholders. A regular Risk, Issues, Opportunities (RIO) meeting was established to track programmatic issues. The leads team also met to create and provide feedback on each revision of the transition plan until that item was signed off in the SMS process. Each project lead had responsibilities ranging from an Engineering Plan for a specific system requirement to coordinating personnel for testing activities.

In the final two weeks before cutover, several major items were finalized. The Information Display System (IDS) installation was completed and equipment was certified at each remote tower. The STARS remote tower equipment installation was also completed and equipment certified. Voice and radio lines were transitioned from K90 to A90 and final tested. The Flight Data Input/Output (FDIO) circuit was also transitioned from K90 to A90 and final tested. The adaptation for ZBW ERAM and A90 STARS also had to be updated to reflect K90 airspace being moved to A90. After months of work and testing, this change occurred early in the morning hours of Feb. 11, effectively removing K90 from the National Airspace System.

Many organizations were involved in consolidating K90 and A90: Air Traffic and Tech Ops at both locations, Engineering Services, several program offices, the Facilities group in AJW-2, specialists at the William J. Hughes Technical Center and the Logistics Center, software support personnel for A90 and K90, and the servicing air route traffic control center (ARTCC) at Boston (ZBW).

The collaborative working efforts finally paid off on Feb. 11, 2018, when A90 assumed all operations from the K90. The transition was seamless with no disruption to Air Traffic Services.

Stanton, Aitken wrote, “was assigned the daunting task of leading the effort to merge K90 with A90. Once assigned the mission, he began building the team and began the weekly coordination meetings required to keep a project of this scope on track. He had a wide range of stakeholders that he had to keep involved in developing and executing this project. Coordinating with Air Traffic and meeting all of their operational requirements while dealing with the many technical issues involved with remoting services from an airfield were a major challenge.”

Aitken said integrating a well-established TRACON into another requires a great deal of planning, coordination, project management, and unique technical knowledge of various NAS systems. Along with remoting the K90 operational positions to A90, four towers and two TRACONS from Falmouth and Nantucket had to be integrated into A90. In addition, Stanton led the effort to develop a solution for controlling the ASR-8 at Falmouth remotely from A90.

Stanton’s experience and knowledge of these systems, Aitken wrote, was critical to the success of the project but even more important, “was his ability to reach out to other experts, stakeholders, and team members in order to develop solutions.”

“He will be the first to say this project was a major team effort,” Aitken said. “That team, however, needed an organized and knowledgeable leader that could bring people together and be held accountable for the mission. Because of his extraordinary efforts in owning and executing this project, the merge went extremely smooth with no impacts to the NAS, which was indeed a major accomplishment.”