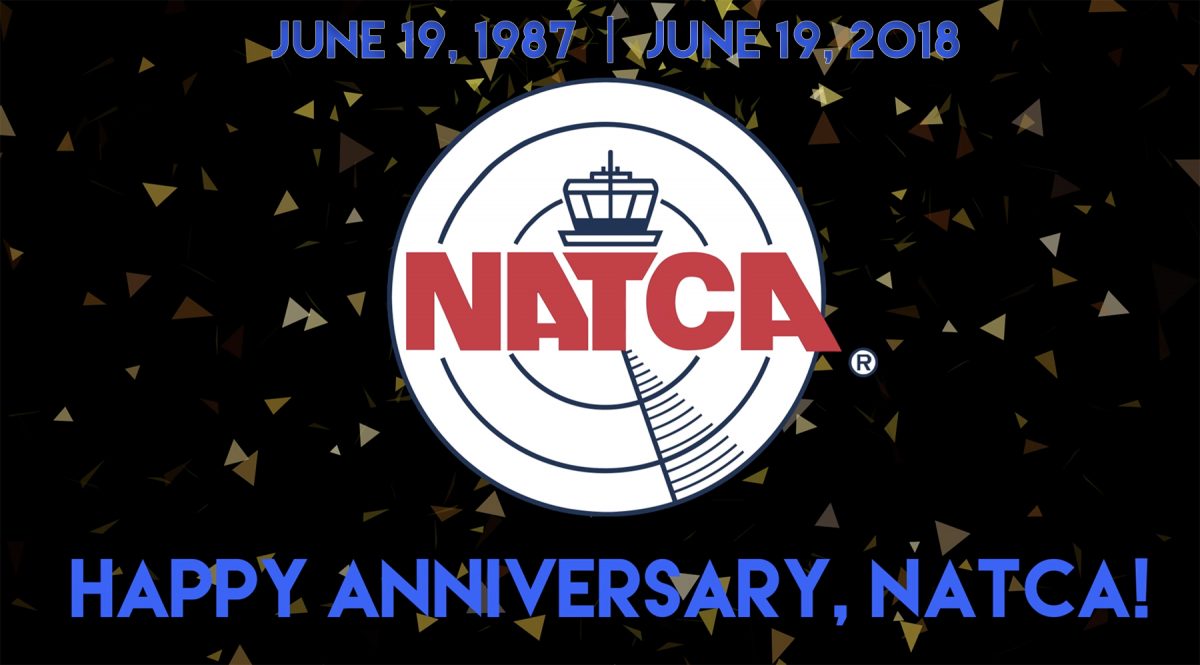 Dear Brothers and Sisters,
On June 19, 1987, the Federal Labor Relations Authority (FLRA) certified NATCA as the exclusive bargaining representative of all air traffic controllers at the Federal Aviation Administration (FAA). Thirty-one years after that certification, despite unions and the rights of workers to bargain collectively facing unprecedented external threats, our Union is thriving. Today, we all should celebrate NATCA’s 31st anniversary. Our collective voice has risen from a small choir to a booming symphony, representing 19,936 bargaining unit employees in 17 bargaining units covered by multiple collective bargaining agreements, with a total of 15,562 members.
NATCA’s members came together for our Union’s 17th Biennial Convention in Philadelphia this April. NATCA members joined in solidarity, discussed many important issues, and positioned our Union to continue to fight for what is in the best interest of our members as we face increasing external attacks.
The Administration has reinvigorated attacks on the retirement benefits of all federal employees, including the FERS social security supplement that is especially important to air traffic controllers. In addition, recent executive orders are intended to reduce unions’ ability to represent workers, make collective bargaining agreements less worker friendly, and expedite the process for removing employees from federal service. NATCA is working to oppose these attacks on federal employees’ rights and benefits.
Congress has continued to struggle to pass government spending and reauthorization bills, and the National Airspace System (NAS) continues to be challenged by the resulting lack of a stable, predictable funding stream. The repeated crises that arise from stop-and-go funding wreak havoc on our system and perpetuate the current staffing crisis, which has resulted in a 29-year low of certified professional controllers.
NATCA has advocated relentlessly to make funding and staffing priority issues on the Hill. NATCA’s activists assembled for a series of rolling lobby weeks in the fall, and last month, activists returned to D.C. to educate members of Congress and their staffs about these critical issues.
Our Union has maintained our positive collaborative relationship with the leadership at the FAA as NATCA said goodbye to outgoing Administrator Michael Huerta and welcomed Dan Elwell, who is serving as Acting Administrator.
During the last year, our Union helped fellow members devastated by powerful and destructive natural disasters including hurricanes and fires. Our members have shown tremendous dedication and generosity with our brothers and sisters in these communities.
We remain incredibly proud and awed by the amazing skill and professionalism demonstrated daily by our members who remain focused on maintaining the safety and efficiency of our NAS despite these natural disasters, political distractions, and changes in leadership. From California to Texas to Florida to Puerto Rico and the U.S. Virgin Islands, NATCA members came together and made sure that the NAS continued to run safely and efficiently. This has always been a hallmark of NATCA – remaining supremely focused on safety while simultaneously fighting for our members and working to grow and strengthen our Union.
Now we look ahead with tremendous optimism to a future that is filled with opportunities for us to take this Union from good to great. Our Union is strong and our member-led activism is at an all-time high. Together we will continue to accomplish amazing things. We’re ready to get to work to write the history that will become NATCA’s 32nd year.
Happy Anniversary NATCA members!
In Proud Solidarity,
Paul Rinaldi, NATCA President
Trish Gilbert, NATCA Executive Vice President