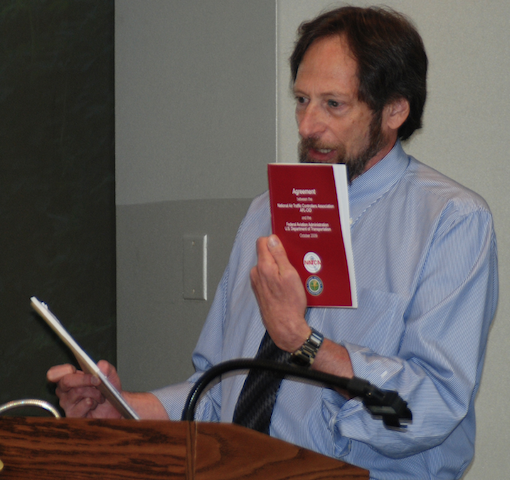 Barry Krasner: He Made a Difference

Barry Krasner made a difference.

In the professional and personal lives of every sister and brother who chose to be a NATCA member, and in the never-ending effort to protect the Union’s members and the National Airspace System, Krasner made a profound and everlasting difference. That’s according to the many fortunate members who got to call him a brother and a friend.

“Barry was clearly the right man at the right time and will remain so for generations of air traffic controllers now and forever,” said Joe Bellino, who won election as NATCA’s second executive vice president on July 31, 1991, the same day that Krasner became NATCA’s second president-elect. Krasner and Bellino served together from 1991-94 during the first of Krasner’s two terms. 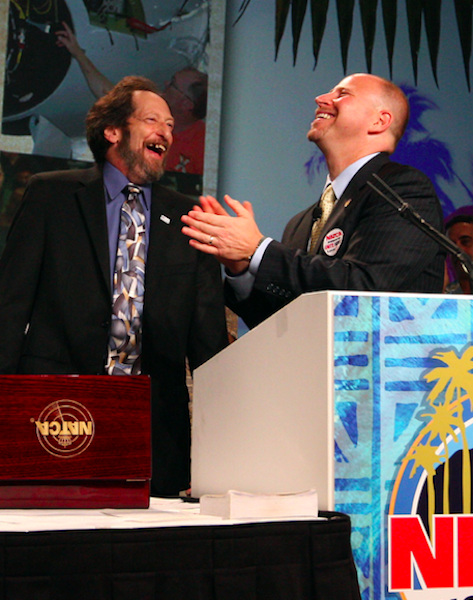 Krasner, whom NATCA President Paul Rinaldi (pictured at right at the 2010 Biennial Convention in Honolulu) called the cornerstone of NATCA and “set the course for three decades and gave us the guidance and direction we needed,” passed away on Monday, July 9. He was 65. Executive Vice President Trish Gilbert calls Krasner “a NATCA legend, visionary, leader, mentor, and beloved friend.”

“His eloquent and persuasive way of getting his point across brought us some of the best work and pay rules in the Federal Sector,” Barbarello said. “Barry’s sharp wit was unparalleled whether in a small crowd or chairing a convention. I had the good fortune to visit with him just last month where we sipped some of his most cherished bourbons reminiscing over our years together. He will be missed by many.”

Southern California TRACON member Eddie Yurus remembers the difference Krasner made for him, when he was just starting his career at New York TRACON (N90). That is where Krasner spent his entire 26-year career, from 1982-2008.

“My first time meeting Barry was in 2002, when I was in training in the labs and CPCs would come in to provide OJTI (on the job training instruction),” Yurus said, adding that this was long after Krasner had first made his indelible mark on NATCA’s history. “I had done some research about NATCA and N90 before getting there so I didn’t know it was him but I knew OF him. I knew he was a former NATCA president and NATCA icon.”

After the session, Krasner quietly introduced himself to Yurus, who was blown away that this was the same larger-than-life figure he had researched and admired from afar. “Yup, that was him,” Yurus said, “just chilling and doing his part and training newbies in the lab, no big deal. I got to work airplanes with him side by side in the LaGuardia Area at N90 for the next few years. My long running joke with him was that my claim to fame is always going to be that I was (proudly) Barry Krasner’s Area Rep when he retired.”

Krasner served as both vice president and FacRep of N90 before being elected as the then newly-certified Union’s Eastern Regional Representative in 1988. Krasner was a member of the negotiating team for NATCA’s first contract, signed in 1989, and was chief negotiator for the air traffic negotiations on the 1993, 1998, and 2005 contract teams. He has also served as chief negotiator for all other NATCA-represented bargaining units.

However, for all of his legendary Union accomplishments in helping to build, lead, and grow NATCA, “I have to believe the thing he’s most proud of is when he was an air traffic controller vectoring airplanes in the LaGuardia Area,” said Eastern Regional Vice President Dean Iacopelli, who was the N90 FacRep when Krasner retired from active FAA duty.

Ruth Stilwell, who served as executive vice president for two terms, from 2000-2006, said that while she is eternally grateful for the support and encouragement that Krasner gave her personally, “he is so much more than the influence he had on individuals. Few people on earth will have the opportunity to change the course of history for a profession; even fewer will seize that opportunity. Barry did with courage, strength and wisdom.”

“If one person can be said to have built a union it is Barry,” Stilwell continued. “He was a leader, a mentor, and advocate but his legacy is so much more than that. In the wake of a great crisis in organized labor, as worker and public sentiment for unions was on the decline, Barry took a workforce, particularly selected as unlikely to support a union and brought them to the highest membership rates in the federal government.”

In 1986, Krasner had been in the Federal Aviation Administration (FAA) for four years and wanted to be involved in shaping its future. Representing his area at N90, he was a member of the FAB (Facility Advisory Board) and was the chairman of the HRC (Human Resources Committee). These were the two workforce involvement groups instituted by FAA management after the 1981 Professional Air Traffic Controllers Organization (PATCO) strike, and the positions were elected from within the areas of operation. Krasner said, “it didn’t take very long to realize what a waste of time they really were.

“I then attended a meeting in the local area where (NATCA’s late founding father) John Thornton wanted to talk to the masses about organizing a new Union called NATCA. I was bit by the bug and have been involved ever since.”

Fellow NATCA founding member Howie Barte, who represented fellow New England Region controllers up to and through the Union’s 1987 certification, recalls first meeting Krasner in March 1986 at a nascent N90 board meeting. Thornton was also present.

“Barry was the vice president of the local. Subsequently we interacted at an increasing rate to the point of friendship,” Barte said. “In 1992, he appointed me Convention Parliamentarian. We went for sushi and sake every time we were together. Barry had an advanced concept of leadership.”

When he decided not to seek a third term as president in 1997, Krasner disappointed many in the Union, like Barte, who felt he had been the best leader they would ever elect. Krasner demurred. If that’s the case, he said, they might as well close the doors right away. “Everybody after me should be better than me,” Krasner said. “Otherwise, we’ve learned nothing.”

LEFT: Krasner leads NATCAvists gathered on the steps of the Capitol at the first Lobby Week (now called NATCA in Washington) in 1993.
RIGHT: Krasner returned to those same steps with a large group of NATCA members protesting the government shutdown in 2013.

By the time the decade of the 1990s ended, Krasner had served as the Union’s first two-term president and was named its first President Emeritus. NATCA had purchased its own office building in Washington, D.C., which it appropriately named after Krasner. The Union had fought and won countless battles in all arenas, had achieved momentous milestones such as achieving pay reclassification, and stormed into the new millennium armed with a landmark contract called the Green Book. It possessed an enormous wealth of confidence and momentum, began to grown its ranks by organizing many other FAA bargaining units of other aviation safety professionals, and saw a rising level of solidarity.

But Krasner would only say he played a small part in the Union’s success. It was the voice of many, not the voice of one, he said, that determined NATCA’s success.

“Going back to our organizing days, we could not even have found our way to the table without the hundreds of dedicated volunteers who were willing to stand together in pursuit of a better life and more rewarding career,” Krasner said. “And this holds true for each and every group of professionals that chose to join the ranks of NATCA over the years.”

“But with that opportunity comes great responsibility,” he said. “Both individually and organizationally, we have the obligation to leave the system and our professions in a better place than we found them. And the way to do that is to marshal our forces and to channel our energies into one cohesive voice.”

Krasner, by any measure, helped leave NATCA in a better place than when he found it.

“I recall when Barry decided not to run again for president in the mid-1990s and he said, ‘I’m not going anywhere, I’m just steppin’ aside. I’ll be here,’” Rinaldi said. “And he certainly was here for the better part of three decades and he was amazing. Everything that Barry did, you look back on it and marvel at the genius he was at looking to the future and moving this organization forward.”

NATCA National Professional Standards co-lead Garth Koleszar said he is regularly asked for advice on how to become more active and influential in the Union.

Koleszar worked with Krasner on the 2009 collective bargaining agreement, the Red Book, which covered the Union’s air traffic controller, traffic management coordinator and NOTAM specialist bargaining units. That experience is where Koleszar says he draws the fondest memories of Krasner, who was a master of leading the team with relentless focus and hard work and also using humor in key moments as a motivating tool.

“I will never forget nervously preparing to present our argument for (Article) 108 to the arbitrators on the last day,” Koleszar said. “He must have sensed my anxiety. He pulled me aside and said ‘Relax, if you mess up, you will only piss off 15,000 of your closest friends. So don’t f— it up.’”

That was vintage Krasner. He was the Union’s driving force, with razor-sharp negotiating skills and an offbeat sense of humor who, during his presidency, placed a stuffed armadillo atop a curio cabinet in his office to stare down visitors.

It’s that humor that Krasner’s wife of 27 years, Sallie Sullivan-Krasner, wants his brothers and sisters and friends to focus on in this time of loss and reflection.

“The next time you get together,” Sallie asks, “whether it be a NATCA meeting, community event or social gathering, belly up to the bar, hoist a glass and toast to this wonderful man. Tell funny stories about him and laugh, for he did not want your pity or your tears.”

She added that Krasner’s wishes were to be cremated and he did not want to have a funeral. Instead, he wanted a celebration of his life, which will follow within the next few weeks. In lieu of flowers, Sallie said, those who would like to pay tribute to Barry are encouraged to make a donation in his name to the Lustgarten Foundation which works to seek a cure for pancreatic cancer.

“I once asked him what he would want on his tombstone and he replied, ‘Barry Krasner – He Made a Difference,’” Sallie said. “And oh what a difference he made!” 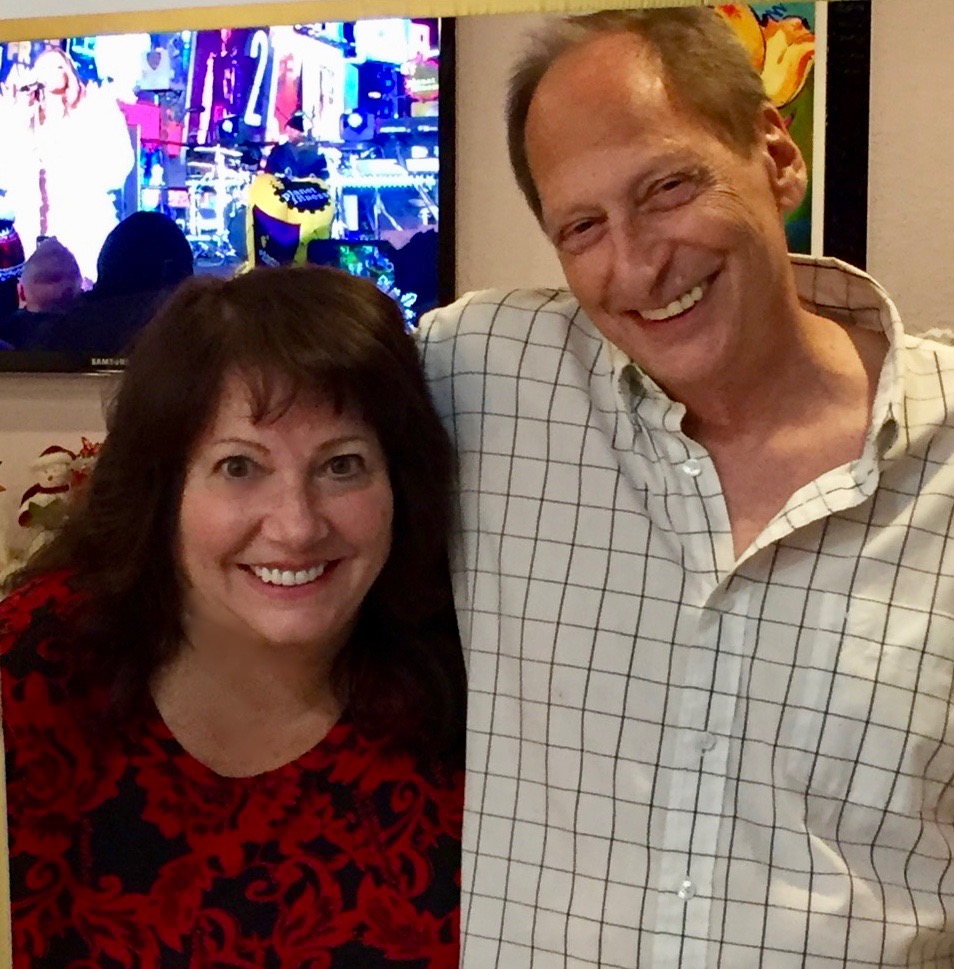 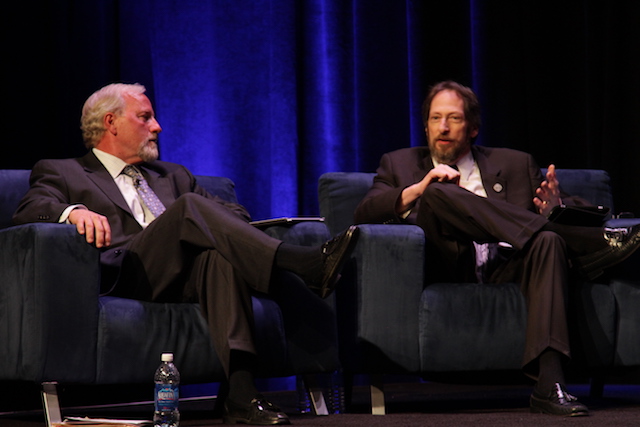 Krasner with NATCA’s first president, Steve Bell, during a panel of NATCA presidents at the 2012 Biennial Convention in Denver. 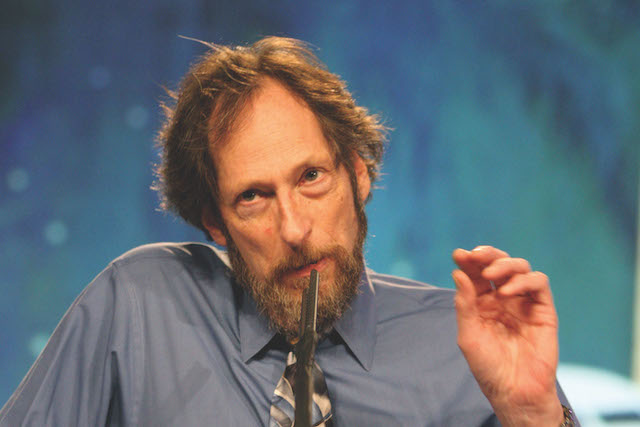 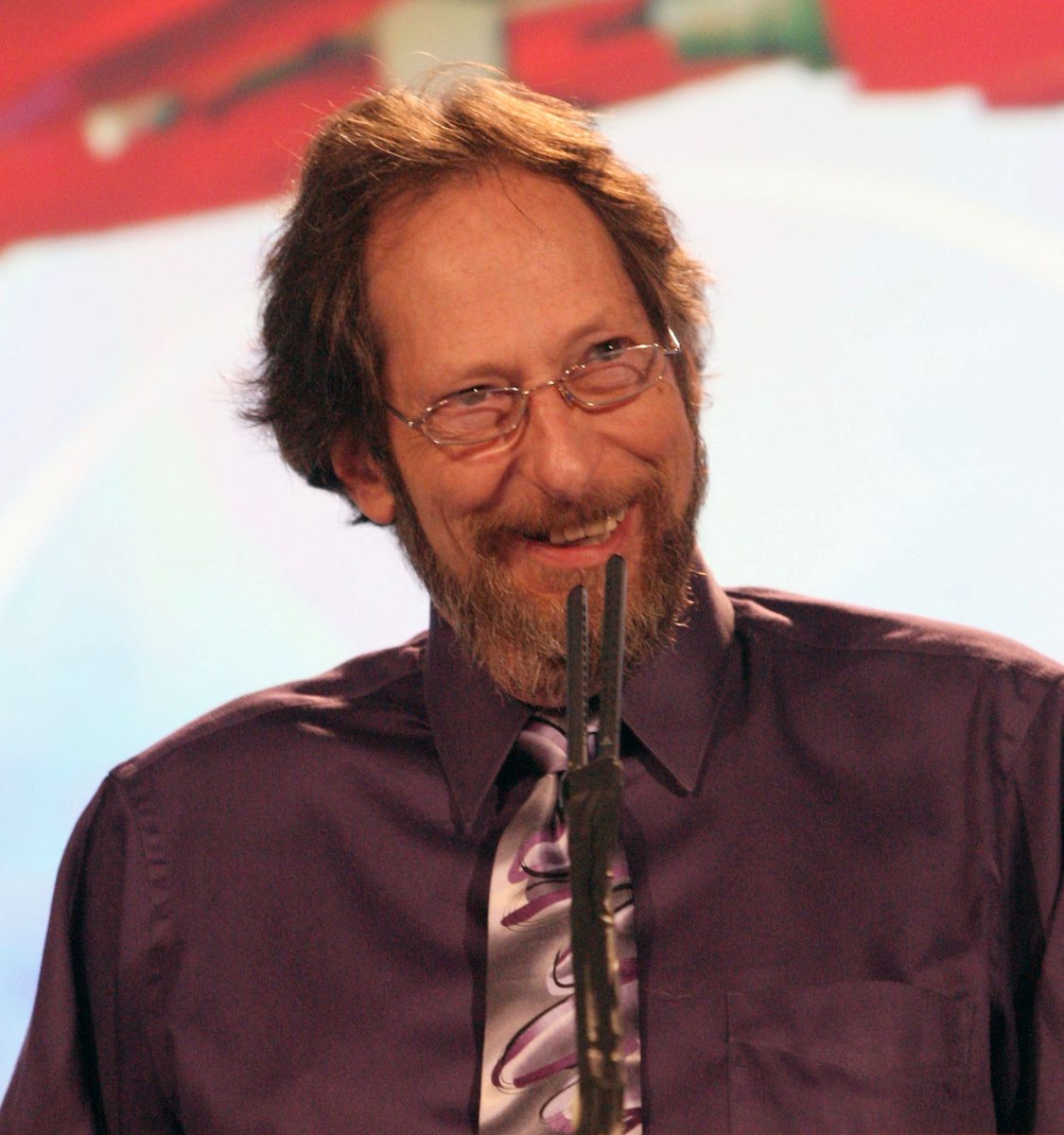