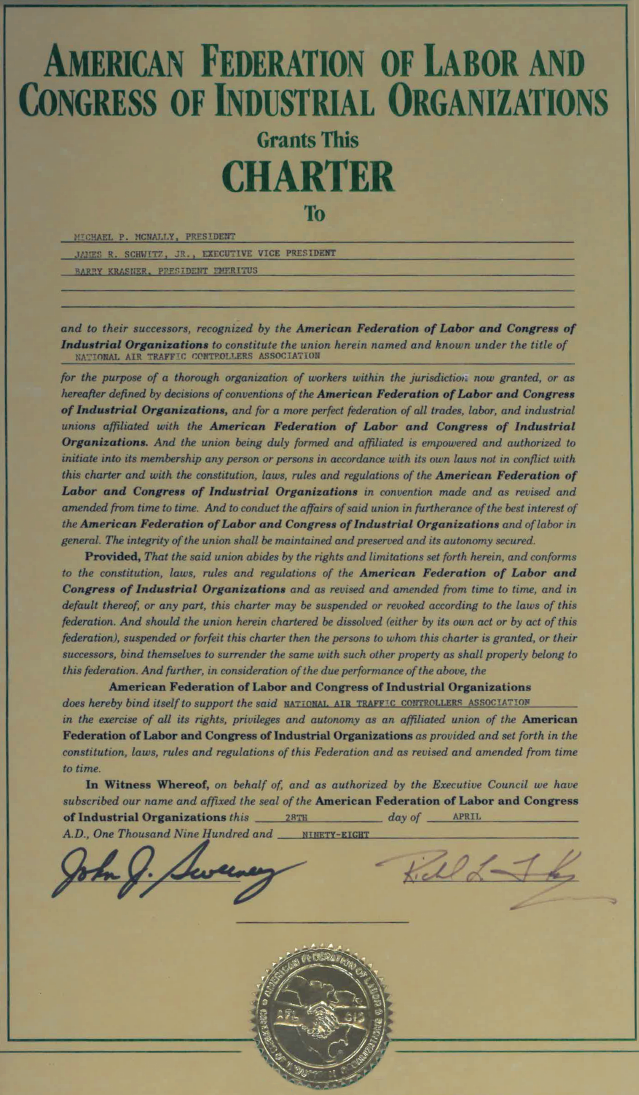 What is NATCA’s biggest accomplishment? Barry Krasner believed one stood out among all the others – the Union’s direct affiliation with the AFL-CIO.

“Trying to determine our biggest accomplishment is difficult given that NATCA has clearly been cutting edge since its inception,” Krasner said in 2014.

“It was recognized early in our existence that as an affiliate of an affiliate (Marine Engineers Beneficial Association), NATCA could not speak with a full voice in the labor movement,” he said. “We always were, and always would be the child of a child.”

NATCA’s finances had greatly improved by the mid-1990s, eliminating its need to continue borrowing money from MEBA. Krasner and then-Executive Vice President Mike McNally presented MEBA with their final loan payment in October 1995. At its September 1996 convention in Pittsburgh, NATCA delegates voted to allow NATCA to align with another union.

During this time, the AFL-CIO advised NATCA that it would not be inclined to grant the Union direct affiliation if the union broke away from MEBA. At Krasner’s direction, NATCA outside counsel William Osborne replied that NATCA intended to achieve independence and it believed direct AFL-CIO affiliation was best for both organizations, adding that the Union was prepared to live with the outcome if turned down.

As part of a court-ordered settlement in June 1997, NATCA asked its members to vote on the issue of affiliation. On Aug. 13, 1997, out of the 6,044 ballots cast, 99 percent favored breaking away from MEBA. The effective date became May 30, 1997, based on an out-of-court settlement with MEBA.

A now independent NATCA faced the formidable task of persuading the AFL-CIO, which represented some 13 million workers, to accept a union with less than 11,000 members as a direct affiliate.

Since the merger of the American Federation of Labor and Congress of Industrial Organizations in 1955, only 20 or so unions had achieved that honor because AFL-CIO policy discouraged direct affiliations.

A three-member special committee on AFL-CIO national charters expressed concern about the 1981 PATCO strike and its effect on organized labor. They wanted assurances from NATCA’s leadership that NATCA did not intend to repeat its history. At the same time, the committee was impressed by what NATCA had achieved during its first decade.

The panel credited NATCA and MEBA with helping to ensure that “the air traffic controllers’ legacy has not been forgotten, that it remains a symbol warning the labor movement against complacency and against forgetting that an attack on one union is an attack on all.”

“Our direct affiliation has given us the greatest opportunity to ensure NATCA is properly positioned for the future,” Krasner said in 2014. “We stand as equal players in the labor community, especially now that our President (Paul Rinaldi) serves as an elected Vice President and member of the Executive Council of the AFL-CIO.”

“We really have no idea how tremendous that is. A union this size to be a direct affiliate and to have a Vice President seat on the Executive Council, is just absolutely amazing. It was Barry who from Day 1 continued to drive that mission. That will last forever and that is beyond groundbreaking and visionary.” 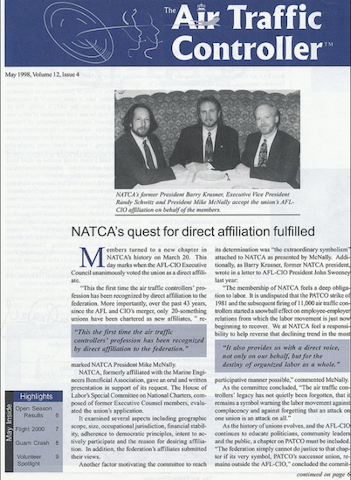