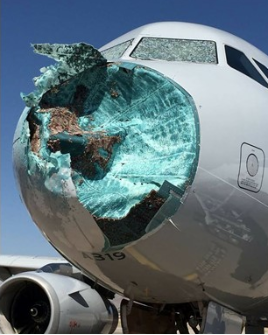 In Their Own Words: Assisting the Crew of AAL 1897 to Safe Landing at ELP on June 3

The night of the hail strike was a rough night at ZAB and especially in my specialty. There was a thunderstorm with large areas of moderate to extreme precipitation from about 100 miles south of El Paso spanning north to just east of Albuquerque. There were two small holes that most flights were going for. As the storm developed, the holes started to close with several pilots reporting severe turbulence and the southern hole was closing.

I took the three handoffs and I noticed that AAL1897 appeared to take the turn slower than others. All of a sudden a call on 121.5 comes out everyone’s speaker. “MAYDAY MAYDAY, AAL1897.” The data block was showing below his assigned altitude and descending. At the time of the MAYDAY call, AAL1897 was north of Holloman Air Force Base (between Albuquerque and El Paso) just east of the White Sands Missile Range. I transmitted on the guard frequency and let him know that Holloman was at his 9 o’clock in 45 miles. I called the Holloman AFB for him again and then noticed he appeared to be leveling off at flight level 320.

I asked the pilot if he had control of the aircraft. He answered yes and I then moved him to my regular sector frequency. After he checked on, he reported a hail strike with damage to the windshield and aircraft. He said that he would need to land at the closest airport. I offered him several airports but with the weather in the area, El Paso made the most sense. He asked for vectors away from the weather which I provided. I assigned him an altitude to descend over the top of White Sands Missile Range.

I called El Paso and advised the controller of the situation. During the coordination with El Paso and the sectors next to me, AAL1897 started a climb and was now above his original assigned altitude climbing toward other traffic in the area. I asked him again if he had control of the aircraft. After a slight pause he said yes and that he was starting down. While all of this was happening, Logan Lyons who had just got off of another position jumped on my D-side. The CIC (controller in charge) at the time, Tammy McClelland worked on getting a hold of someone to get permission to go through the active restricted airspace. She then had Logan split off the sector above me so I could work the emergency without any distractions.

AAL1897 was able to descend to a lower altitude and was handed off to El Paso without issue. We all got word that the flight landed safely and that there were no injuries.

I cannot say enough about all of my NATCA brothers and sisters and the work that they did that night. Hearing MAYDAY from a commercial airliner is something that I don’t think anyone in that room could have ever imagined hearing. All of us were even more surprised when we saw the extent of the damage as the pictures of the aircraft started making their way around the next day. I am glad that I was able to do my part in helping AAL1897. I am proud of the work that that all of my brothers and sisters did that night, from Tammy, Logan, and everyone else in the South East Area that night to our brothers and sisters at El Paso that helped AAL1897 land safely.  The fact that an emergency where a pilot declared MAYDAY, ended with the flight landing safely and no injuries is a testament to the level of skill and professionalism our workforce carries.

It was just a normal “Monday” in my world until ZAB called and said AAL1897 would be diverting to ELP. A call sign I will never forget. Everything seemed “normal” as far as emergencies go. POB, fuel remaining, ringing the crash phone, etc. The calm voices of the American pilots. “Whatever you need, sir,” I would tell myself. We’d move that mountain for you if we could.

After circling to burn fuel, they requested my favorite approach, the (old faithful) ILS RWY 22. They also asked for a 15 NM final. My first thought was, that NOTAM… our ILS was no longer usable past 16 NM. I had to get this approach spot on.

I could not have fathomed the substantial damage the aircraft endured. I knew the pilots could not see; they had told me that much themselves. I honestly didn’t think about it much because we had to get them safely on the ground with or without that windshield. I was just focused on setting them up safely so the pilots could do what they do best; land airplanes.

The pilots of AAL1897 did a phenomenal job. They remained calm under extreme pressure, landed on the first attempt, and ensured 135 people went home to their loved ones that night. And I’m the one being called a hero. It’s hard for me to wrap my head around that because I was just doing my job. A job I love to do. The true heroes here are the captain and first officer of AAL1897.

I feel like I’ve been getting all the credit for this and it’s only because it’s my voice on the tapes. I couldn’t have done it without the unwavering help of my NATCA brothers and sisters working beside me and above me that evening.

So cheers to Alex (AV) Varela for opening up another position and working all the arrival and departure traffic so I could concentrate on AAL1897. Cheers to Ricky (CG) Garza for calling down from the tower and giving me a landing clearance before I could even ask for one. Cheers to Courtney (CE) Hill for being my eyes on ground control when AAL1897 requested to remain on my frequency all the way to the terminal. And cheers to Samantha (JO) Rablin for jumping behind the desk as CIC, fielding all the phone calls and being my extra pair of eyes and ears in the TRACON. I truly could NOT have done it without each of you. Thank you from the bottom of my heart.

To the captain and first officer, I hope you get a well deserved paid vacation. If I ever get the pleasure of meeting either of you, first drink is definitely on me. So cheers to you, AAL1897. A call sign I will never forget.