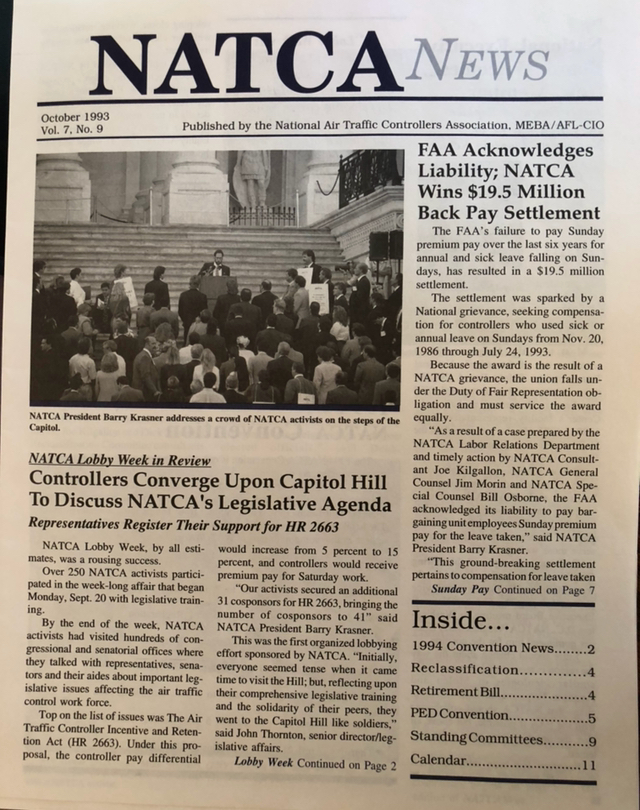 NATCA Lobby Week, by all estimates, was a rousing success.

Over 250 NATCA activists participated in the week-long affair that began Monday, Sept. 20 with legislative training.

By the end of the week, NATCA activists had visited hundreds of congressional and senatorial offices where they talked with representatives, senators, and their aides about important legislative issues affecting the air traffic control workforce.

Top on the list of issues was The Air Traffic Controller Incentive and Retention Act (HR 2663). Under this proposal, the controller pay differential would increase from 5 percent to 15 percent, and controllers would receive premium pay for Saturday work.

“Our activists secured an additional 31 cosponsors for HR 2663, bringing the number of cosponsors to 41,” said NATCA President Barry Krasner.

This was the first organized lobbying effort sponsored by NATCA. “Initially, everyone seemed tense when it came time to visit the Hill; but reflecting upon their comprehensive legislative training and the solidarity of their peers, they went to the Capitol Hill like soldiers,” said John Thornton, senior director/legislative affairs.

After a day and a half of legislative training, taught by the Congressional Quarterly, NATCA activists ventured to Capitol Hill to talk with elected officials and members of their staff.

The week came to a close Thursday afternoon with a rally held on the Capitol grounds. Several Washington television and newspaper reporters attended the rally and interviewed NATCA officials and members about the safety of the air traffic control system.

“From the reports I have received on your activity, it is obvious that the important voice of air traffic controllers will once again by heard on Capitol Hill,” said Lane Kirkland, AFL-CIO president.

Thornton, who conceptualized and organized the event with the assistance of NATCA Legislative Committee members, said NATCA Lobby Week will become a recurring event.

“Lobby Week was extremely successful in providing our members with congressional relations training and time to begin building relationships with their elected officials,” said Debbi Cunningham, chair of NATCA’s Legislative Committee. “It was the best event NATCA has ever held.”