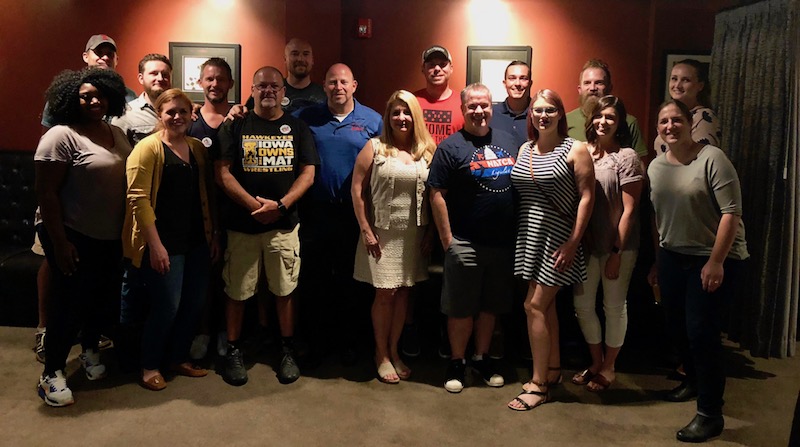 Returning to Where it All Began: Kevin Peterson Reflects on Special Trip Back to Des Moines as He Prepares for Retirement

Central Regional Vice President Kevin Peterson began his Federal Aviation Administration (FAA) career in 1986 at Des Moines ATCT (DSM), one year before becoming a charter member of NATCA. So it was fitting that Peterson’s last National Executive Board (NEB) meeting earlier this month was held in Des Moines, Iowa, to honor his dedication to the Union, the membership and the Central Region.

Peterson was presented with the Tim Haines Memorial Award of Honor and Distinction. NATCA members and employees who have done an exceptional job representing NATCA values are honored with the award, otherwise known as the “Timmy Award.”

“The best part of my career in the FAA has been serving the NATCA bargaining units,” he said. “It was special to go back to Des Moines for my last NEB meeting. Serving NATCA as a member of the National Executive Board has truly been the highlight of my 32 and a half-year career. Nine years ago, NATCA President Paul Rinaldi and Executive Vice President Trish Gilbert set a vision for this Union and it was based on a collaborative relationship with the FAA and proving our importance to industry. The National Executive Board fully supported this path to our future. It has been an honor serving this Union and having even a little part in helping NATCA become the best it’s ever been and knowing we have a wealth of talented young people that are going to continue with that growth.”

Peterson has served three terms as NCE RVP. While at DSM, he served as both secretary-treasurer and vice president of the local. In 1990, he returned to his home state of Missouri and went to work at Kansas City ATCT (MCI). There, he served as facility representative from 1994 to 1999, and then a second time from 2001 to 2009.

Peterson also served as chairman of the Drug and Alcohol Committee from 2016 until earlier this year. He is currently a member of NATCA’s Safety and Technology Leadership Council, which is the focal point for NATCA on all safety issues, procedural changes, technology development and implementation, airspace modernization, and all associated training needs.

Taking over for Peterson on Sept. 1 as NCE RVP will be Aaron Merrick, currently the NCE Alternate RVP and FacRep at Kansas City Center (ZKC).

“It has been an honor and privilege to serve as a FacRep and ARVP under Kevin’s leadership over the past nine years,” Merrick said. “Kevin’s dedication to NATCA and to the Central Region has never wavered and our region and our Union are better because of the work he has done.”

Merrick credited Peterson’s mentorship with preparing him to assume the RVP position. However, Merrick added, “Make no mistake, there is no replacement for the knowledge and experience he brought to the position of RVP. I wish Kevin all the best as he finishes his career and I will strive to embody the professionalism and dedication he brought to the job each and every day. Congratulations brother!”