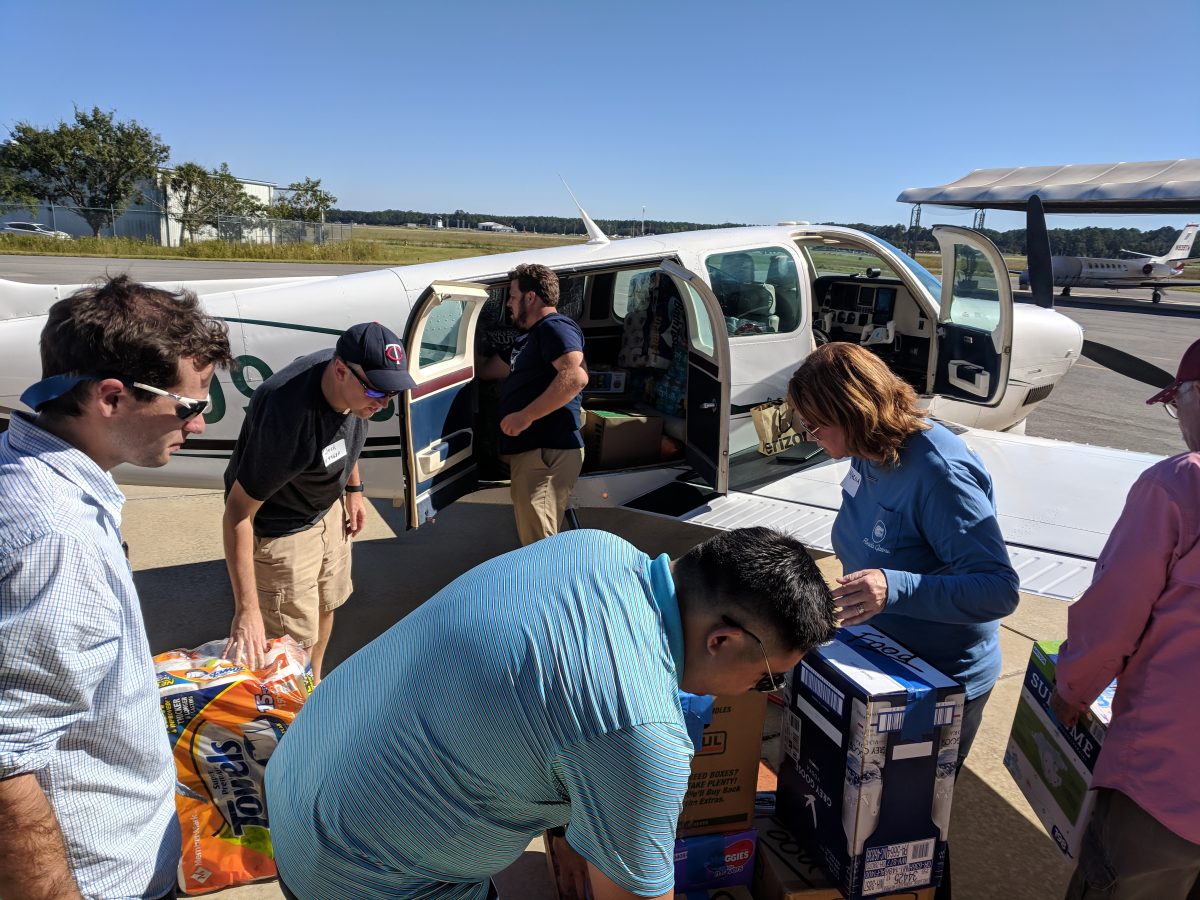 Hurricane Michael dealt a crushing blow to the lives of several fellow NATCA members in the Florida Panhandle last week. Thanks to your donations to the NATCA Disaster Relief Fund, the NATCA Disaster Response Committee (DRC) has provided equipment, supplies, emotional comfort, and volunteer efforts to expedite the restoration process.

“I would personally like to thank (DRC Chair) Tom Flanary and the NATCA Disaster Relief Fund for their help in assisting our facility here at ECP,” said Panama City Federal Contract Tower (ECP) FacRep Harry Osburn. “Although most of us were spared a major catastrophe, others in our community weren’t so lucky. It’s nice to know your (NATCA) brothers and sisters have your back when you need it.”

Flanary led the coordination of relief efforts, helping to move supplies, improve supply chain logistics, and working with organizations such as Operation Air Drop (OAD) to get supplies airlifted to those needing them. In one example of this teamwork, Flanary met North Carolina-based volunteer pilot Mike Jones in Daytona Beach (DAB). Mike offered his Cessna Centurion specifically for the use of the DRC. He loaded six new generators onto his plane, which were purchased the day before with money from the NATCA disaster relief fund. Within two hours, Jones had the generators loaded, flown, and offloaded into the hands of NATCA members in Tallahassee (TLH).

“All of the volunteers involved have gone above and beyond to expedite the flow of relief supplies,” Flanary said. “One volunteer in particular, Bonanza pilot Josh Kendrick, who is also a pilot for FedEx, flew to Florida from Memphis to work on his days off to move supplies for OAD and NATCA. In doing so, he was volunteering his airplane and his own time, at no cost to OAD or NATCA. When Josh arrived to pick up supplies for ECP, he said that on his last supply flight to Apalachicola, the guy who met him was crying when he saw all of the food and water. The recipients of the supplies were absolutely floored that a complete stranger was helping them recover.”

A controller from Bradley TRACON (Y90) and her three children have been displaced as a result of the storm while she was on National Guard active duty at Tyndall Air Force Base. While the Air Force will be assisting her in moving out of the area, her house, car, and all of her belongings are inside the security corridor at Tyndall AFB, which is inaccessible.

Controllers in the TLH and Destin (DTS) areas have also received their share of storm damage. Large pine and oak trees are down everywhere, leaving roads impassable. Many have taken damage to their fences and siding on their homes. Most of these controllers were without power, but it is slowly being restored on a daily basis.

“In total, we have around 30 NATCA members, plus their families, who live in the disaster zone of Hurricane Michael,” Flanary said.

Read the full statement from the Disaster Response Committee here

NATCA has activated its disaster relief fund to assist members who may be affected by Hurricane Michael. Our brothers and sisters who live and work in facilities of the Southern and Eastern Regions are rallying to offer support and assistance as needed, as is the NATCA family as a whole.

Additionally, NATCA has established an email to help those offering assistance and those in need. Any members who have supplies to donate and any member in need of assistance or supplies due to the storm can send an email to michaelhelp@list.natca.net.

NATCA established its disaster relief fund in 1992 in the wake of Hurricane Andrew in Florida. The fund provides assistance to our members who have experienced catastrophic losses of property and helps provide a lifeline during those most desperate times.

NATCA will work directly with affected members to help them purchase food, gasoline, or any other supplies that might be required. Please help us make sure there are sufficient funds available to support our brothers & sisters in need. Any donations made will go directly to the NATCA disaster relief fund. We will have volunteers ready to deliver supplies as soon as we know the need.

How You Can Help

Please consider donating to the NATCA Disaster Relief Fund. All of the money collected is used to purchase supplies, equipment, and basic life essentials for NATCA members and their families impacted by disasters. The following methods can be used to provide financial donations:

– PayPal your donation to natcarelief@natcadc.org