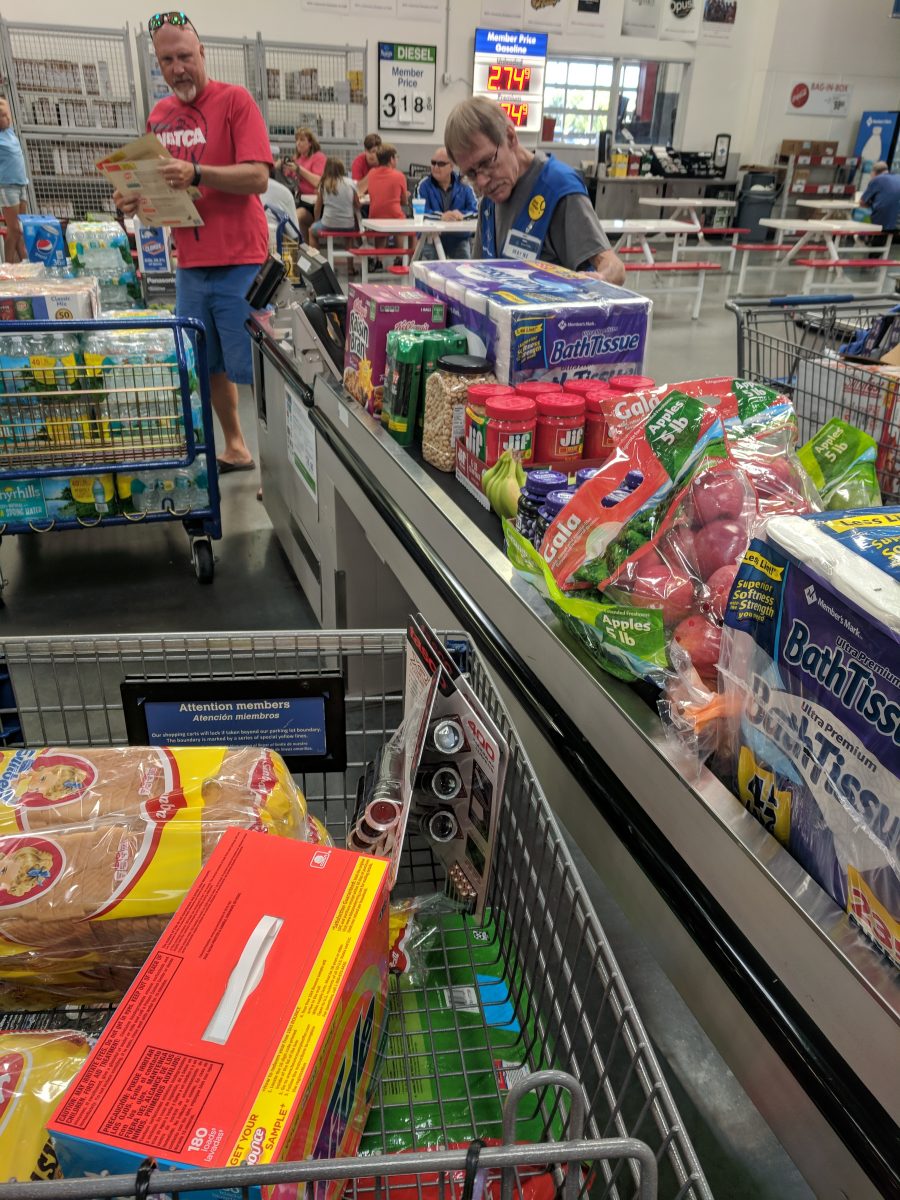 Hurricane Michael dealt a crushing blow to the lives of fellow NATCA members in Northern Florida last week. The physical damage will take months to repair, but the emotional damage will last a lifetime. Thanks to your donations, NATCA’s Disaster Relief Committee has provided a considerable amount of equipment, supplies, emotional comfort, and volunteer efforts to expedite the restoration process following Hurricane Michael. Allow me to share my recent experiences while assisting our brothers and sisters in the Sunshine State.

I drove to Gainesville (GNV) yesterday to help move supplies on behalf of the NATCA Disaster Response Committee. I was also working on improving supply chain logistics for the committee into the Panama City area. Operation Air Drop (OAD), which is a 501(c)(3) non-profit, has been instrumental in helping us get aircraft full of supplies airlifted to our controllers. They did an amazing job with Hurricane Florence relief efforts by moving supplies almost daily for us, and they continue to do so for our response to Hurricane Michael. Their organization handles the steps of arranging aircraft, volunteer pilots, and the loading and unloading of supplies. The pilots, many of whom are airline pilots from across the United States, graciously donate their time and their personal aircraft to move supplies for us.

Two days ago, I met North Carolina-based volunteer pilot Mike Jones in Daytona Beach (DAB). Mike kindly offered his Cessna Centurion specifically for the use of the NATCA Disaster Response Committee. He loaded six new Honda generators onto his plane, which were purchased the day before with money from the NATCA Disaster Relief Fund. Within two hours, Mike had the generators loaded, flown, and offloaded into the hands of NATCA members in Tallahassee (TLH).

After meeting Mike in DAB, I continued to GNV where I spent the rest of the day arranging logistics for the upcoming re-supply effort on Saturday. A former Silver Airways hangar was donated to weigh, sort, and store supplies for relief flights. John Vogelsang (P31 Ret.) sent me a text message offering his personal assistance and his truck. With John’s help, we visited a number of stores in the area, and returned to the hangar with an entire truckload of supplies. All of the supplies were purchased by your generous donations to the NATCA Disaster Relief Fund. Among the items we purchased were basic food essentials including ramen noodles, coffee, cases of water, life straws (devices that turn unsanitary water to drinking water), dog food, canned tuna, and various other necessities.

We also purchased some pre-paid mobile phones after learning that most of the cellphone service in the area had been compromised by the storm. Local residents told us that Verizon Wireless worked in some spots, while AT&T functioned in others. We hedged our bets and purchased pre-paid phones on both networks. We now have more reliable communications with members at Northwest Florida Beaches Int’l Airport (ECP)and can arrange continued supply runs. 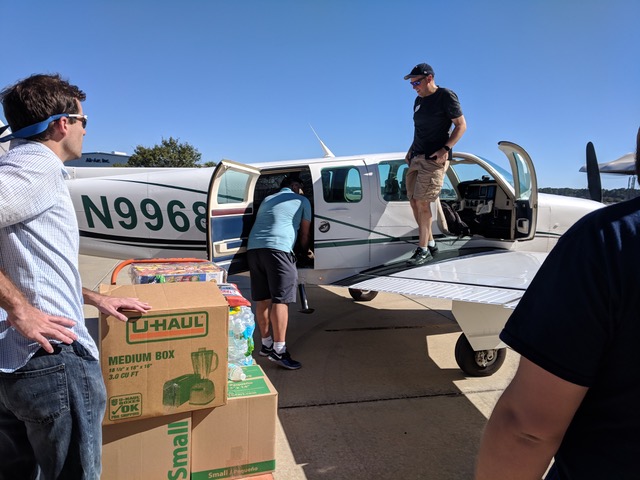 Back at the hangar, we unloaded the supplies we purchased. In less than an hour, three aircraft were airborne and headed to ECP and TLH. We had so many supplies for NATCA member that we filled a Cessna 172 and Piper Cherokee, as well as nearly filling a Beechcraft Bonanza. In order to maximize our efforts, Operation Air Drop donated another 300 lbs. of food to be sent to the controllers at ECP. By the end of the day’s airlift, we sent near 600 lbs. to TLH and another 1,000 lbs. to ECP.

All of the volunteers involved have gone above and beyond to expedite the flow of relief supplies. One volunteer in particular is Bonanza pilot Josh Kendrick, who is also a pilot for FedEx. Josh flew to Florida from Memphis to work on his RDOs to move supplies for Operation Air Drop and NATCA. In doing so, he was volunteering his airplane and his own time, at no cost to OAD or NATCA. When Josh arrived to pick up supplies for ECP, he said that on his last supply flight to Apalachicola (AAF), the guy who met him was crying when he saw all of the food and water. The recipients of the supplies were absolutely floored that a complete stranger was helping them recover.

While delivering supplies to ECP, Josh told ground control that he had supplies for them. Josh noted that the entire airport was just buzzing with activity and incredibly busy. There were 5-6 helicopters taking off from the ramp near Josh, including search & rescue, law enforcement, and military helicopters. The FBO had all of their employees helping to unload aircraft. Many of the employees and volunteers were visibly shaken by the damage to their city. Josh didn’t want to leave the supplies unguarded, for fear that they would get mixed in with supplies meant for other organizations. After waiting an hour and a half at the FBO, we were able to arrange for Airport Operations to pick up nearly 1,000 lbs. of food, water, and other supplies. Airport Operations and Josh transported the supplies to the control tower for safe keeping. Josh, a complete stranger to the ECP controllers, selflessly waited almost two hours just to make sure the supplies got to the controllers. That’s absolutely incredible! (Picture of Josh & his Bonanza is attached) 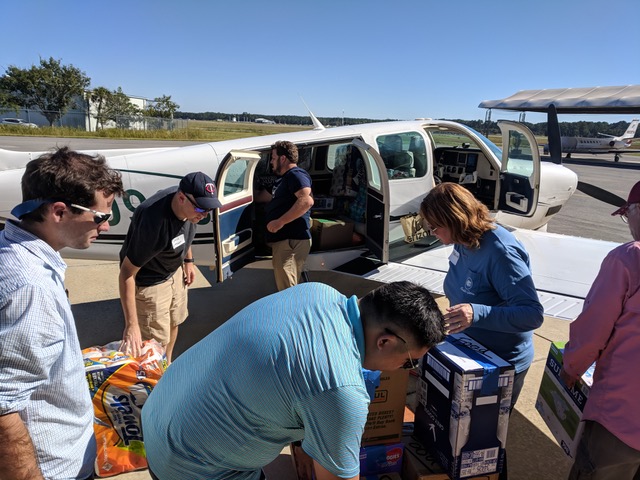 Due to the widespread damage, ECP controllers living near the Gulf coast have not been allowed to return home. In addition, ECP is a very small federal contract air traffic control tower. The controllers have been swamped with a dramatic increase in relief effort traffic, which means they haven’t had a day off to check on their own property. Controllers are staying with friends, or in RV trailers until they are allowed back into their neighborhood. Electrical companies estimate that power will return to the Panama City area in three months.

A controller from Bradley TRACON (Y90) and her three children have been displaced as a result of the storm while she was on National Guard active duty at Tyndall AFB. While the US Air Force will be assisting her in moving out of the area over the next few days, her house, car, and all of her belongings are inside the security corridor at Tyndall AFB, which is inaccessible.
Finally, controllers in the TLH and Destin (DTS) areas have also received their share of storm damage. Large pine and oak trees are down everywhere, leaving roads impassable, trees down in yards, and many have taken damage to their fences and siding on their homes. Most of these controllers are without power, but it is slowly being restored on a daily basis. Still, some areas may not have power for an estimated two weeks.

In total, we have around 30 brothers and sisters, plus their families, who live in the disaster zone of Hurricane Michael.

How You Can Help

If you’re in the area around ECP, can safely provide your own transportation, and are willing to volunteer on your days off (or on annual leave), contact me on our e-mail list at michaelhelp.list.natca.net. We can find you a place to stay with another NATCA member.
Our goal during the relief stage of the disaster is to make the lives of the affected controllers easier. That means we’ll go into the area, clean up their trees, their yards, tarp their roofs, and if there is worse damage, mitigate it by any means necessary. No task is too small when it comes to helping others in need. For example: after Hurricane Florence, volunteers from Washington Center (ZDC) cooked for the controllers who were impacted by the storm’s excessive flooding and wind damage.

If you’re in the Gainesville/Orlando area and have a day to volunteer, go to the University Air Center at the Gainesville Airport and help Operation Air Drop. They could use help loading supplies into aircraft. If you’re looking to donate supplies, they have plenty of aircraft, and can move those supplies to help people in the affected areas. They have been graciously offering supplies of their own, which have been sent to controllers in ECP, DTS, and TLH.
If you live outside of the area but still want to help, please consider donating to the NATCA Disaster Relief Fund. All of the money collected is used to purchase supplies, equipment, and basic life essentials for NATCA members impacted by disasters. The following methods can be used to provide financial donations:

Checks: Payable to “DRF” or “Disaster Relief Fund.” Mail to:

When disaster hits, whether it is a hurricane, tornado, flood, wildfire, or man-made incident, the Disaster Response Committee stands ready to assist fellow NATCA members. Your donation is greatly appreciated.
In solidarity,