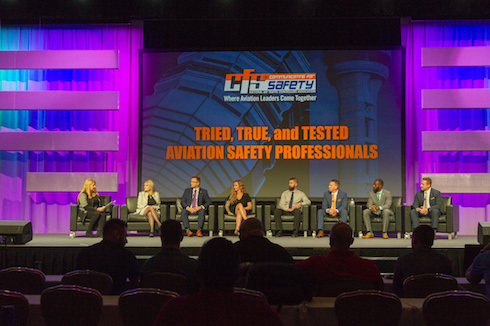 FAA Air Traffic Organization Chief Operating Officer Teri Bristol introduced the panel, which took a close look at how aviation safety professionals handled four incidents over the last 15 months: an Air Canada aircraft that erroneously lined up to land on a crowded taxiway at San Francisco International Airport; the Oct. 1, 2017 shooting at a concert on the Las Vegas Strip adjacent to the McCarran International Airport; the April 2018 emergency involving the catastrophic engine failure on Southwest Airlines Flight 1380; and the August 2018 stolen Horizon Air plane by a suicidal Horizon employee who flew it above the Seattle-Tacoma area before crashing on a wooded island.

“Aviation safety professionals may go their entire career without encountering a serious problem,” Bristol said, offering both praise for the professionals who handled these incidents and perspective for each facility. “I truly believe that every day is a training day,” she said. “Every day is an opportunity to reinforce our core skills.”

Regarding the SFO incident, Steve Jangelis pointed out that the crew was tired, flying a visual approach, and hadn’t flown into SFO in over a year prior to that night. “If we were flying precision approaches, this probably would not have happened,” he said, adding that one thing that can occur when lining up for an airport with parallel runways is “expectation bias.” In this case, a closed runway created a need for more vigilance to ensure they were lined up correctly which was not applied. “We’re trying to get pilots into the mindset of how do we mitigate those risks?”

Jamaal Haltom and Anthony Borgert told a riveting story about how controllers at each facility rose to the occasion despite an assortment of challenges, starting with the initial confusion over what exactly was happening and the fear that LAS controllers might be shot at.

“Ideally, you would have an all-knowing understanding of what was occurring,” Borgert said. “But that’s not reality. You work with what you know.”

Haltom said initial reports were of multiple shootings on the Strip. Controllers believed they might be at risk and debated whether to stay in the tower. Then a call came from an off-duty LAS controller who was at the concert, escaped the gunfire, and had the presence of mind to call the tower to frantically ask them to stop the helicopter traffic over Mandalay Bay and that part of the Strip.

“You had people on the runways,” Jon Weaks said. “Were they shooters or being shot at? There were so many things going on and just a level, calm voice from air traffic control. They were coordinating on the fly. Everyone in this room owes LAS and L30 a huge shout out.”

On the Southwest 1380 incident, Lyn Montgomery said flight attendants’ minds went to the training they had received but this emergency brought multiple challenges.

“We are also first responders. Preparedness is deliberate training,” she said. “We were trained for decompression and an emergency landing, but then we had someone being partially ejected from the aircraft, the noise of the rushing air, trying to communicate with the pilot. Everyone knew they had a job to do.”

At Seattle TRACON, Kimberly Brooks credited the entire crew on duty for performing a great team effort. “It was really incredible; the collaboration with Sea-Tac Tower and the way the room was reconfigured to handle the situation,” she said. “Seattle Center (ZSE) did an incredible job with the traffic coming in and redirecting them. I’m new to the FAA. The majority of my time has been military. It was incredible, the response, and then afterwards the support. The CISM (Critical Incident Stress Management) crew came. That was very helpful.”