The Local Safety Council (LSC) at Potomac TRACON enhanced surface safety at all of its airports through the development of a procedure to help controllers remember Notice to Airmen closures.

Editor’s note: Surface Watch is a recognition program jointly sponsored by the FAA and NATCA. It acknowledges individuals or teams of controllers and supervisors for their exemplary saves and initiatives that focus on the surface environment. So, Take a Stand for Safety and celebrate your facility’s surface achievements. We want to hear about these successes.

The Local Safety Council (LSC) at Potomac TRACON received Surface Watch recognition for its work in addressing the human factors related to the ATO’s rolling Top 5 item addressing wrong surface landings – in this case, specifically those resulting from an aircraft being issued an approach clearance to a closed runway or airport in the TRACON’s airspace. 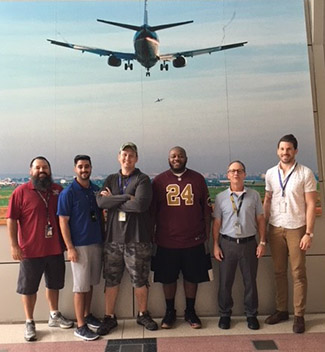 Over about 10 months, the TRACON experienced three significant events when aircraft were cleared for approaches to closed runways or airports. In each case, Notices to Airmen for the closures were posted on the controllers’ integrated display system, and the controllers had been made aware of the closures, either when they went into effect or during a position relief briefing prior to taking the position. In each event, the backup mitigation also failed.

During the first event, after clearing the aircraft for a visual approach to the closed runway and transferring communications to the tower, the local controller also initially forgot the runway was closed.

The next event resulted in an aircraft landing on a closed runway at a non-towered airport in low-visibility conditions; airport management had not placed the Xs at the runway ends indicating a closed runway.

In the final event, the pilot questioned the runway he was told to expect, stating that the digital information service was reporting that runway was closed; however, the pilot was issued, and accepted, the approach clearance to the closed runway.

After examining the circumstances of each event, the LSC recognized that they had to search for mitigations that focused on the underlying human factor: memory. Although it is common for visual memory aids to be used in the tower environment, especially for closed or occupied runways, the use of memory aids in the TRACON environment is less common.

“The first challenge was recognizing that Potomac was culpable when it came to clearing aircraft into closed airports or to a closed runway,” said Bryan McDonough, the TRACON’s NATCA safety representative. “The second challenge was identifying that our issues were related to human factors, and not procedural deficiencies. The final challenge, and probably the most difficult, was coming up with a product for the visual aid.”

The LSC designed restriction areas, sometimes referred to as “geos,” to be depicted on all controller displays when specific runways are closed at Potomac TRACON’s five major airports – Andrews Air Force Base, Baltimore-Washington International, Reagan National, Dulles International, and Richmond International – or a runway/airport is closed via NOTAM at a satellite airport.

A Safety Management System panel analyzed the new restriction area procedures and identified some unintended risks. As a result, the shape and location of the runway closure restriction areas were changed to reduce “clutter” and distraction over those runways that were still open, and to keep their corresponding approach courses and departure ends free of distraction as well.

The LSC employed creative thinking to address this NAS-wide safety risk. It took patience over the six-month development period and attention to detail to ensure that the final design and procedures addressed the underlying human factor without introducing additional unintended distraction risks. The procedures have been in effect for four months with no instances of aircraft being cleared for approaches to closed runways or airports.

“The local safety council realized that something needed to be done to address the closed-surface landing issue,” Strother said. “Many of the controllers at Potomac have never worked in a tower, so they had little, if any, experience with visual memory aids. Having the information displayed on the (Information Display System) was simply not enough. Bryan and the LSC-area representatives did a great job of coming up with a solution and then taking it to the workforce to get the buy-in needed to make it happen.”