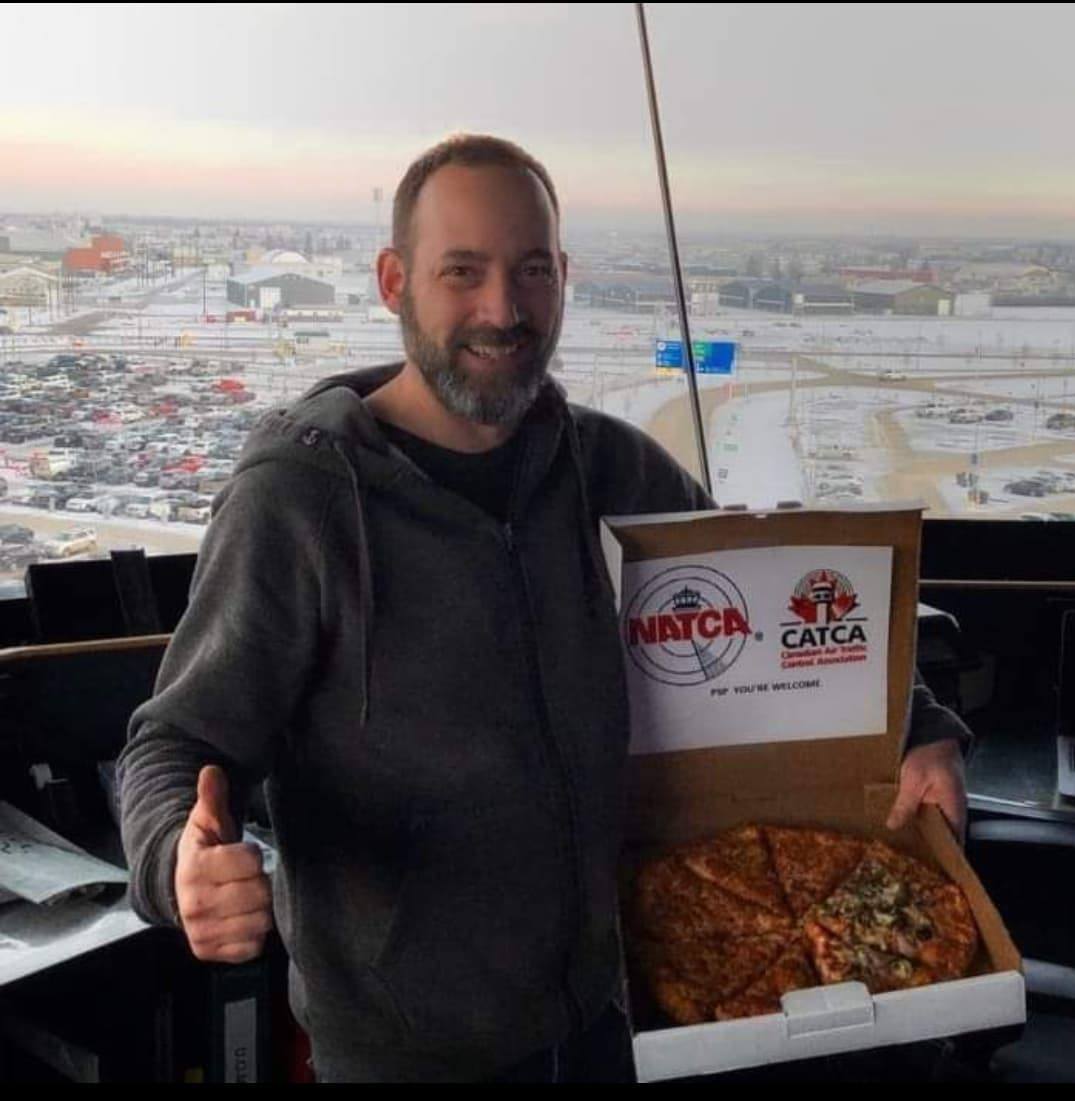 Pizzas Across the Canadian Border

Palm Springs ATCT (PSP) NATCA members Shyan Lasater-Bailey and Stuart Hocking were pictured in an edition of NAV CANADA’s new publication for employees, smiling with pizzas gifted from their Canadian brothers and sisters during the shutdown.

“PSP received pizzas from Saskatoon CYXE CATCA Chair Paul Mongeau,” Lasater-Bailey said. “Paul chose PSP because he wanted a smaller facility, similar to his own, to feel the love.” When the pizzas arrived at PSP, Mongeau sent Lasater-Bailey a photo of himself enjoying pizza in his own facility, with “PSP YOU’RE WELCOME” printed on the box alongside the NATCA and CATCA logos, “so we could all eat together,” Lasater-Bailey said. “We sent them a PSP NATCA sticker, and it is up in their tower cab.”

Here’s an excerpt of the NAV CANADA news story, explaining how the viral pizza-gifting got started:

When Michael Cormier decided to make a small gesture of support for his fellow air traffic controllers in the United States, the idea caught on quickly with his coworkers at the Edmonton ACC. It was an idea that would soon catch fire too with many other controllers across NAV CANADA. In no time flat, that idea was making the news – stories and tweets about a veritable flotilla of pizzas being delivered to U.S. controllers who were at work but not getting paid due to the partial government shutdown.

“It was never a question of taking up a donation, that never happened,” says Michael. “People here sought me out, asking to be part of this. To me, that’s important. It says a lot about the people we have here.”

By the end of January, Canada’s air traffic controllers had sent pizzas to 120 NATCA facilities. “It sparked a whole cross-country movement, and I think that just shows a pretty high degree of empathy for our fellow controllers in the U.S,” says Michael. “In aviation especially, this is not all that unusual, as in our industry everybody is always helping someone else – we’re all part of a very collaborative effort.”

“It surely wasn’t a significant act on my part. Only when it became part of this grassroots movement did it become more meaningful. To me, I guess it says that if you get a chance to help someone out, even in a small way – do it. Because maybe it will have a bigger impact than you would ever expect.”