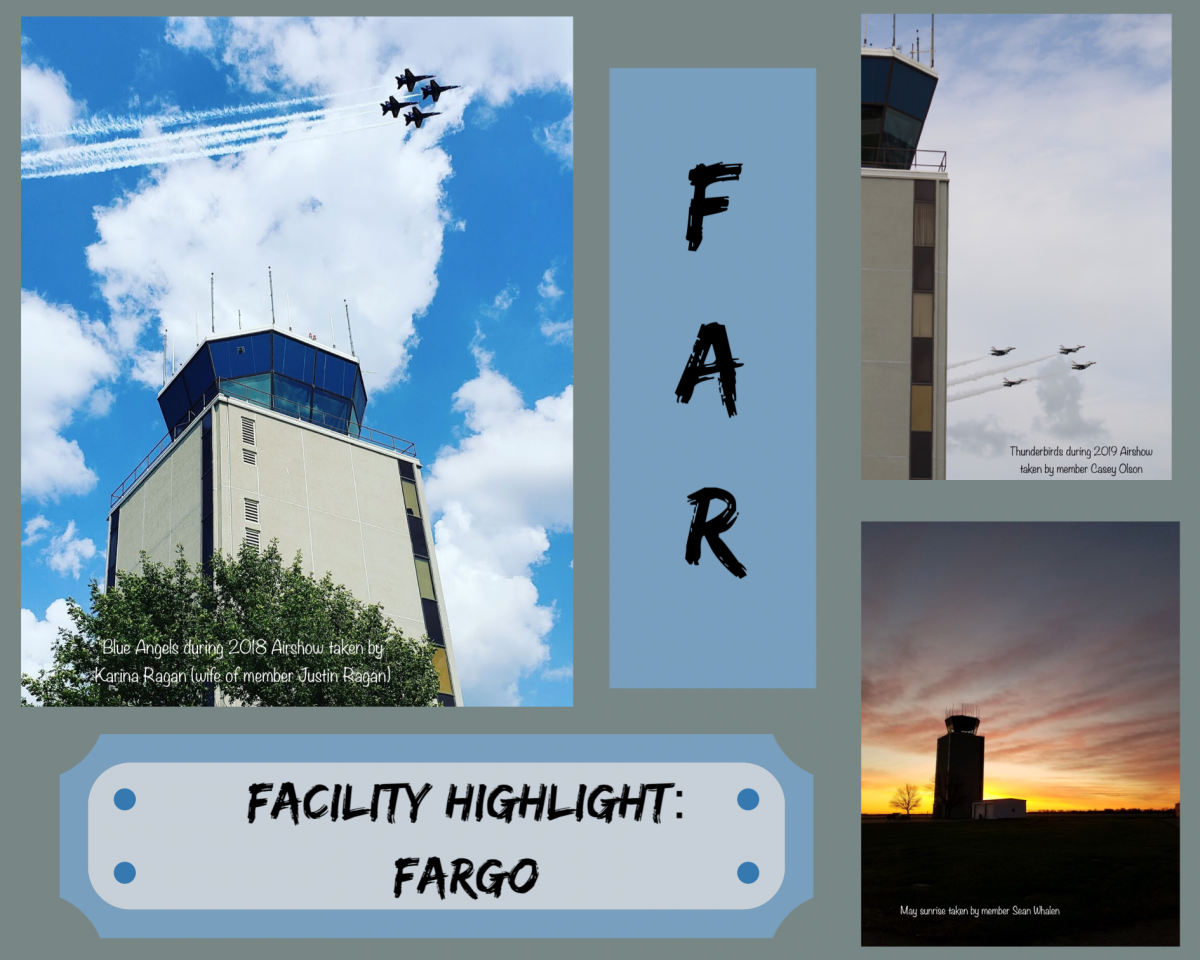 Fargo has 21 bargaining unit members and is a 100% NATCA facility.  This includes 17 CPCs, 1 CPC-IT, 2 Developmentals and 1 Staff/support specialist.

We are a 24 hour, Level 6 up/down with a TRSA and a Class Delta and have seven uncontrolled secondary airports in our airspace, which is about a 35 mile radius around FAR.  Our traffic consists of a broad mixture of air carrier, air taxi, general aviation and a little bit of military.  We work everything from heavy B767s and A300s to light sports and gliders.  There are five airlines that fly to 11 destinations out of FAR, with more expected in the near future.  The airport has been expanding and in the last three years has added both FedEx and UPS operations, which has given us a good traffic bump and until the COVID-19 pandemic we were on track to a possible level 7 upgrade.  The Fargo Jet Center is the only FBO on the field and has a busy local flight school with about eight single and twin engine trainers.  They also are conveniently co-located with customs and provide service to private travelers arriving from overseas.  The FBO is also home to Weather Modification Inc, which flies a large fleet of twins that travels the globe doing cloud seeding and other atmospheric projects.

We have a unique operation at Fargo in that we are one of only two airports nationwide that allows unmanned aircraft to integrate with manned aircraft in the terminal environment, the other being SYR. The North Dakota Air National Guard 119th Wing based at FAR flies the MQ9 Reaper, which has a 66 ft wing span and flies speeds similar to a small twin.  They currently have four MQ9s based locally and they fly them both in the local traffic pattern and depart the area to a number of different restricted airspaces within a few hundred miles.  To fill their see and avoid responsibility, the pilots are allowed to fly remotely by using a ground observer on the field that must keep the MQ9 in sight at all times when they are flying within the Class Delta and when they leave the Delta they use a Mooney as a chase plane.  The chase plane usually departs prior to the MQ9, holds over an area adjacent to the airport and once the MQ9 is airborne, they report it in sight, relieving the ground observer, and follow the MQ9 until they reach their restricted airspace.  When the MQ9 wants to return, the chase plane does the same thing in the reverse order until the ground observer has the MQ9 in sight at FAR.  Working an unmanned aircraft can be challenging at times as they aren’t allowed to follow traffic in the pattern, so as controllers we have to call their turns whenever they are following or when wake turbulence rules apply and we have learned to build in plenty of space when they land as it takes a long time for them to taxi off the runway.  Our summers are considerably busier than our winters as winter weather can be as cold as everyone assumes it is and our summer traffic is increased by local pilots traveling east to the lakes in Minnesota, parachute jumping operations just outside the class Delta and we typically have an airshow every other July.

The other facilities we work with are ZMP Sector 24 and Grand Forks RAPCON.

The Fargo area is a great place to live and raise a family, good school systems, relatively low cost of living and is big enough that it has everything a person could need, but small enough to drive across the city in less than 20 minutes.  The majority of the controllers grew up in the area or have ties close to this area, with 15 of the 21 being University of North Dakota graduates.  Fargo is located right on the border of Minnesota and the popular Minnesota lakes country is only an hour drive to the east, providing close vacation or day trip opportunities throughout the year.

Our facility has only recently been 100% NATCA and the solidarity of the membership shows in how everyone here pitches in and takes ownership in how the facility functions.  It isn’t hard to find volunteers when a new workgroup starts up and the controllers here really take pride in doing everything together.  I think NATCA is important at our facility because it doesn’t matter how many leadership changes we see in the agency, we have a local that supports a common goal of doing what is best for this facility, looks out for one another and is a place where you can look for someone to help you out in a time of need.