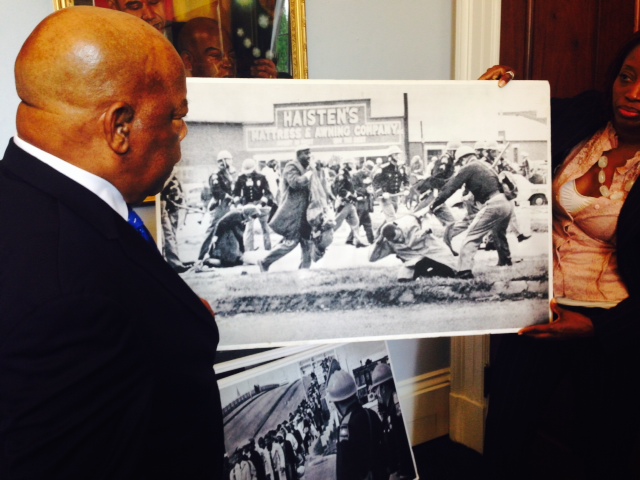 Remembering Rep. Lewis With Gratitude: ‘He Always Saw the Good in People’

Congressman John Lewis was many things, from civil rights icon to recipient of the Presidential Medal of Freedom. But NATCAvists who had the honor of meeting him say they will remember him as a gentle soul who had the ability to express appreciation for greatness in others whenever they were in his presence.

NATCA joined the nation and the people of Georgia’s 5th congressional district in mourning the passing of Congressman Lewis last month. The Union is overwhelmed with gratitude and appreciation for Congressman Lewis showing us all the greatest example of courage, humility, grace, determination, and conviction.

To visit his office (pictured above, during NATCA in Washington 2014) was an opportunity to receive an incredible history lesson in civil rights and the fight for racial justice. What he witnessed, what he stood for, what he marched for, what he endured, and what he lived to see before his passing are markers in our nation’s civil rights history that leave us in awe and empower us to move forward in his memory.

“The main thing that sticks in my mind from meeting him was his genuine love and hope for people,” said Atlanta Center (ZTL) member and former Georgia State Legislative Coordinator Amber Miller. “He always saw the good in people. It’s so easy to get jaded and focus on the negative. He wasn’t like that at all even after everything he experienced. He was loving and joyful. He definitely led by example.”

Retired ZTL member Dub Pearman said he had the privilege of meeting Congressman Lewis several times. “He was a humble servant of his fellow man, and a fierce opponent of injustice,” Pearman said. “Congressman Lewis had a subdued yet enormous presence. He was always welcoming and respectful even if he disagreed with you.”

Pearman recalls one year at NATCA in Washington, during the annual congressional reception, when Congressman Lewis and a few of his aides arrived. “Congressman Lewis was shaking many hands, as to be expected, while his aides and myself followed him around,” Pearman said. “I mentioned to the aides, ‘You know, you get to work for an honest-to-God hero.’ To which they both smiled ear-to-ear with a resounding, ‘Yes, we know.'”