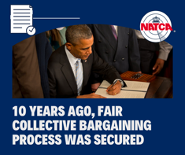 NATCA is marking a notable anniversary: Ten years ago, on Feb. 14, 2012, President Obama signed H.R. 658, the FAA Modernization and Reform Act of 2012. It was the final step in making FAA Reauthorization a law. It ended a five-year-long effort to achieve an FAA bill and more than seven years of NATCA trying to amend Title 49 and establish a fair collective bargaining process for all of its members. Sec. 601, which addresses the personnel management system, was the critical provision that ensures that FAA bargaining units will never again have work and pay rules imposed upon them by their employer, such as what occurred during the White Book lost years.