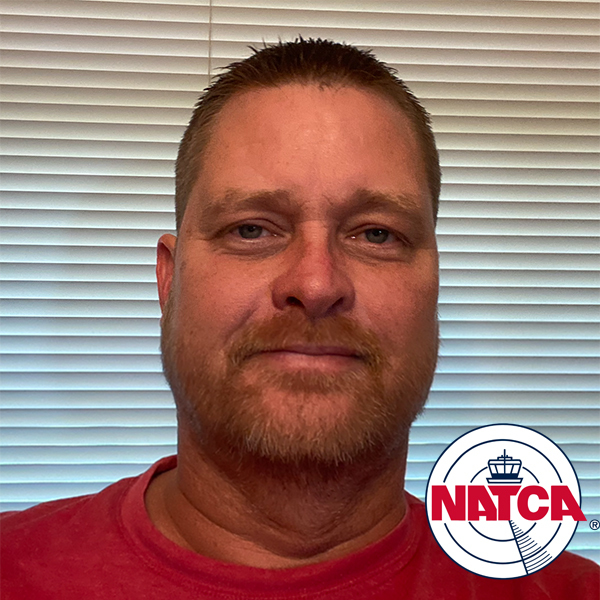 First, Wright, a U.S. Navy veteran who plans to retire later this year after a 26-year career, will be back in the state of Louisiana, where he began his FAA career at Shreveport ATCT (SHV) in 2001. Second, he will be reunited with Daniels, his former co-worker at Fort Worth Center (ZFW). Wright arrived at ZFW in 2004, shortly before Daniels. Wright transferred from ZFW to I90 in 2009, where he experienced quite a bit, including working as one of the 12 employees who stayed at the facility for 76 straight hours during Hurricane Harvey in 2017.

“I’ve been able to see the whole gamut of air traffic, from flight planning in the Navy, all the way through to the tower discipline, the approach discipline, and the center discipline,” Wright said. “I feel really satisfied and fortunate for my career and all the experiences I have had.

“I’ve usually been in the right place at the right time.”

Perhaps never was that statement more true than the late afternoon of Thursday, Feb. 11, 2021. Wright was working the Houston Hobby (HOU) final position. The weather was IFR, with ceilings at 800 feet and a storm system moving in from the northwest. HOU was landing on runway 31-left and nearby Ellington Field Joint Reserve Base (EFD) – located seven miles east southeast of HOU – was landing on runway 35-left. The two approach courses intersect at a five-mile final for EFD and an eight-mile final for Hobby. Inbound HOU aircraft stay at 3,100 feet until they cross the intersection, then descend to at or above 2,100 feet a mile and a half later.

“Technique has gotten me through a lot. In this situation, it allowed me to keep things separated a little more clearly than maybe someone who had a different technique,” he said. “You can work the two finals independently of each other, as long as you’re minding your altitudes. You don’t have to blend Ellington with Hobby. You just have to be ready to descend to make their sequence work.”

On this day, a Piper Cherokee was cleared for the ILS to EFD. A Gulfstream G400 was being vectored behind the Cherokee for the ILS into HOU. After giving the Gulfstream a turn towards final, Wright noticed that the Cherokee appeared to be struggling to stay on the localizer.

“This individual I noticed, when flying the pattern, was just not as steady and didn’t seem as confident as other training that’s going on,” he said.

Wright noticed some variations in the pilot’s headings and altitude variations. He advised the pilot of those things and got him on the approach on the first attempt. He seemed to be stable and Wright switched him to EFD tower. He went back to working other traffic but then observed the Cherokee pilot approach the marker in an unstable fashion and determined there was no way he was on the localizer which was used to keep aircraft aligned with the runway.

Wright then noticed the aircraft turn to the right and start climbing. Without hesitation, Wright issued the Gulfstream an immediate left turn and climb away from the Cherokee. While he was doing this, EFD called to inform Wright that the Cherokee had lost his gyroscope. Wright had four HOU arrivals on his frequency, with the first in sequence being taken off the approach on a vector away from the Cherokee, which requested vectors for another try at the ILS although the pilot seemed unable to maintain a consistent altitude. In the background, an emergency was declared and other controllers searched for other airports with better weather conditions.

“He seemed a little rattled and rightfully so,” Wright said of the Cherokee pilot. “I knew, in my 26 years of aviation experience, with no gyro and those weather conditions, if you get disoriented it can go bad very quickly. My intention was to do the very best I could for him control-wise, but also keep him calm. If I got tense, it may have caused him to have a little bit of a problem in concentration.

“I just did the best I could to keep him calm. If he broke air traffic rules, or climbed, or turned, or did something I didn’t tell him, I just advised him of it and gave him as much room as I could.”

The other aircraft in the pattern headed into Hobby heard what was happening. Wright continued to work them as he monitored the Cherokee’s position. “When I had an opportunity to slide one in, I would get them into Hobby,” he said.

The Cherokee pilot got back onto the localizer but soon descended into a tight, steep turn. Wright saw his altitude drop rapidly, starting from 2,400 feet, then to 2,000 feet. “I asked him, ‘are you OK?’ and he said, ‘I don’t think we’re OK,’” Wright said. “That’s when I knew it was a dire situation. That’s when I came to the thought that I was going to offer this man some assistance that he can’t see. I never want to take control of the plane or put them in a position where my actions are going to cause them a problem. But he was clearly in a situation that was not good.”

Wright advised the pilot to roll to the right and pull back. The pilot didn’t acknowledge, so Wright called out to him a couple of times. The pilot then broke out of the cloud ceiling at 700 feet and reported he could see the ground. Wright advised him he was in a safe area, with no obstructions or traffic. The pilot said he could see EFD, so Wright issued him a contact approach. The crisis was over and the pilot soon landed safely. Wright then found himself in a very unfamiliar physical condition.

Wright said a fellow controller took over his position while he took about an hour to collect himself. “That was the most traumatic event of my career, by far,” he said. “I was really shocked at the physical effect it had on me. Once everything was done, it was just an unload of adrenaline that was just incredible.”

I90 FacRep Luke Miller said Wright’s “unflustered demeanor, attention to detail, and professionalism throughout this incident were exemplary. His actions may have saved the lives of both people onboard the aircraft. His ability to continue to expertly work Hobby arrivals was particularly impressive.”

Wright said that while he feels pride at how he performed, it’s harder talking about the event now than it was dealing with it then as far as keeping his composure and staying professional.

“Talking about it now, it’s still a little bit emotional,” he said. “It’s been a wonderful career.”

Wright is the fourth I90 member to win the Archie League Medal of Safety Award, joining Stewart Pearcy (2014), Hugh McFarland (2015), and Michael Schawinsky (2019).