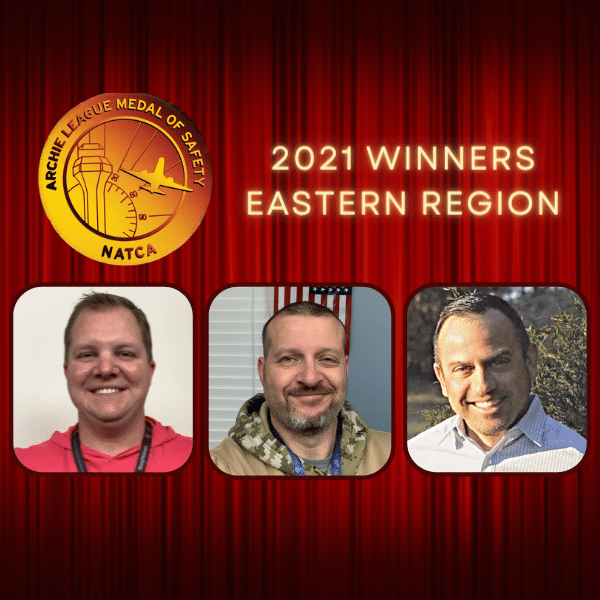 By Sept. 15, 2020, six months into the COVID-19 pandemic, air carrier traffic volume was greatly reduced, presenting opportunities for many general aviation pilots – and students, with their instructors – to do takeoffs and landings at major airports. One such flight, a Mooney M20 piloted by a student with an instructor, departed runway 1 right at Washington-Dulles International Airport (IAD).

Just a short time later, as the Mooney was at 4,600 feet, the aircraft suffered a total engine failure. The choice to be near IAD turned out to be a most advantageous decision.

“I think because of that lack of full airline schedules, I think this was a nationwide thing; I think people were taking their GA airplanes to places they dreamed of going and this was a good example,” said Potomac TRACON (PCT) member Joe Mash, who talked with the pilot and worked with fellow PCT members Jason Dunaway and Chris Rhodes to help the flight return safely to IAD. “The instructor and their student took their plane to Dulles for a quick in and out flight. (The emergency) could not have happened at a better time or place, that is for sure. Lucky for them.”

Mash, who has spent his entire 16-year FAA career at PCT, said there were three sectors open at the time, plus a controller in charge. They had skeleton crews due to the pandemic, with just 5-6 controllers running an area that, in normal times, takes at least nine and often 12-13 when it’s busy. On this September 2020 day however, Mash said there was a lot of GA traffic, including busy satellite airports.

Mash had been on position for a half hour, handling IAD departures, when the Mooney came off IAD and headed northbound. Another northbound departure, a United Express Embraer 175L, rolled off runway 30. Mash climbed the aircraft out of 2,300 feet, up to 3,500 feet – 1,000 feet below the Mooney – and turned it north.

Shortly after, the Mooney declared an emergency.

“We had just started running the cruise checklist when we heard a loud bang, and the engine started shaking,” the pilot wrote in a statement provided to NATCA for the nomination materials for this award. “I immediately took the flight controls from my student.”

Mash immediately worked to stop the United Express’s climb and turn it westbound to get it out of the way of the emergency aircraft, which needed a direct shot to return to IAD. He cleared the Mooney pilot to make a left turn, direct Dulles, and land any runway.

“At 4,500 feet, only a couple miles west northwest of the field, I had altitude on my side,” the pilot wrote. “I could likely have made any runway, but I did not want to attempt to go further than my glide would have allowed. I made a quick decision to take 19C. I innately started going through my ABCs of emergency procedures. I quickly realized at that point my objective was not to glide far, but to descend quickly to the runway.”

Meanwhile, Dunaway and Rhodes could overhear – and sense – what was going on and it piqued their attention right away. They cleared the final and coordinated with IAD controllers.

“I had the south feeder sectors and the west feeder, the south and west satellite area, and the finals all combined up,” said Dunaway, a Marine Corps veteran with 30 years of experience, including the last seven at PCT. “So, I had about six or seven frequencies combined up. You catch something, you hear something, but the whole thing lasted less than a minute. I had aircraft all pointed at the airport for different runways, and I just started pushing them around and switching the runways on short notice.

“I had about five or six Dulles arrivals in a base feed configuration to land. Several of them were set up to land 1 center, which was set up to land opposite direction from the Mooney needed to go, so I pushed those guys over to 1 right, got some other traffic out of the way, and held some traffic out until we knew this guy was going to land. It happened quick.”

The Mooney was a few miles northwest of the airport at 4,500 feet, and when the pilot elected to land 19 center, “I figured the pilot knew he was a little too high to come straight in on runway 12,” Mash said, adding that he thought the pilot would also know he had two miles of runway to expel the remaining energy of the aircraft. He was right. Wrote the pilot, “I began a forward slip on final and was aiming for the front of the runway with anticipation of floating over the runway. I was nearing touching down when I saw the 5,000 feet of runway remaining marker. That was when I knew that we made it.”

“Overall, I am proud of the result, and considering the circumstances, it ended in the best possible outcome,” the pilot wrote.

Mash said he is humbled by the award and “definitely honored” to be a part of the recognition but added that he felt this was just “another day on the job.”

Dunaway echoed Mash’s sentiments, citing another emergency situation that the group handled involving a helicopter around the same time as this emergency landing as an example of what “routinely happens in this job.” “Joe’s been doing this a while and I’ve been doing this a long time and these emergencies happen,” Dunaway said. “We’re surrounded by unsung professionals. Every day, people are doing stuff like this around the country and not getting recognized for it. It’s pretty cool to be recognized for something like this. It’s definitely an honor.”