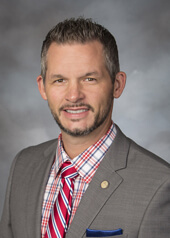 “I am honored to have the opportunity to serve the hard-working members of the Central Region and carry on the tradition of the great leaders that have served before me, representing NATCA members from Missouri, Iowa, Nebraska, and Kansas,” said Merrick, who served as Central Region Alternate Regional Vice President since 2014.

Merrick has spent his entire two-decade FAA career at Kansas City Center (ZKC), first in the Trails Area and then, since 2006, in the Ozark Area. He has served as ZKC FacRep since 2013. He was born and raised in Sedalia, Mo.

He is a 1994 graduate of Sacred Heart School in Sedalia, Mo., a 1996 graduate of State Fair Community College (AA Degree), a 1998 graduate of the University of Missouri-Kansas City (BA Degree), and a 1999 graduate of Midwest Aviation Resource Consortium (MARC).

Merrick and his wife Shannen have three children, Caden, Cohen, and Cami.