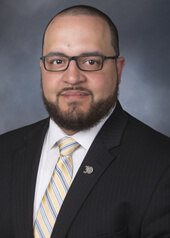 Alex began his Federal Aviation Administration (FAA) career in 2008 at Seattle TRACON (S46) and has worked as a controller at Seattle Center (ZSE) since 2013. He was a controller in the Air Force and worked for one year at a Federal Contract Tower in Renton, Wash. (now a NATCA-represented facility).

He began his activism within NATCA as S46 treasurer in 2009, and has also served as both vice president, and most recently, FacRep at ZSE. In addition, he has worked as Washington Legislative State Coordinator, a LEAP (Leadership Experience Acceleration Project) instructor, and as a Drug and Alcohol Committee member.

“The role of treasurer at Seattle TRACON was more than just the specific task of accounting and tracking local funds,” he said. “What became evident very quickly is that it was a leadership role. I was on the local executive board and that meant I had a voice to address matters of direction in our local and the ability to represent my local in and out of our building. It showed me that one of the main strengths that NATCA has is the ability to empower all members to be active and protect the membership. We battle as a collective unit, not as individuals.”

Alex is married to fellow NATCA member Samantha Navarro of Seattle ATCT (SEA), and they have two children, Tomas and Mariana.