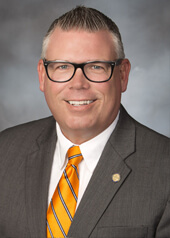 MacQueen served as NGL Alternate Regional Vice President (ARVP) for two years before beginning his term as RVP on Sept. 1, 2018. “I am extremely humbled and honored by the trust that’s been placed in me to lead our great region,” MacQueen said. “I am fully committed to working tirelessly on their behalf to ensure our beloved region continues to thrive and flourish for many years to come.”

He served as NATCA local vice president (VP) at RHV, local secretary at SFO, and local treasurer at PHL. At ZOB, he served as local VP for two and a half years before serving as FacRep from July 2010 to January 2017. Additionally, MacQueen’s extensive Union service includes working on the Right From the Start campaign and the NGL labor relations team, and serving as a LEAP class instructor, Operational Planning And Scheduling (OPAS) implementation lead, and Air Traffic Operational Management/OPAS transition team lead. MacQueen also served on the 2016 Slate Book Contract Team which negotiated the current collective bargaining agreement for the Air Traffic Controller, NOTAM Office Specialist, Traffic Management Coordinator/Specialist, and Alaskan Flight Service Specialist bargaining units.

“I’m incredibly excited to represent the Great Lakes Region on the next National Executive Board,” MacQueen said. “I’m eager to bring new ideas, more member involvement, and an increased level of enthusiasm to the Great Lakes Region and the National Executive Board. Under Paul (Rinaldi) and Trish’s (Gilbert) leadership, this new NEB will accomplish great things on behalf of the NATCA membership.”