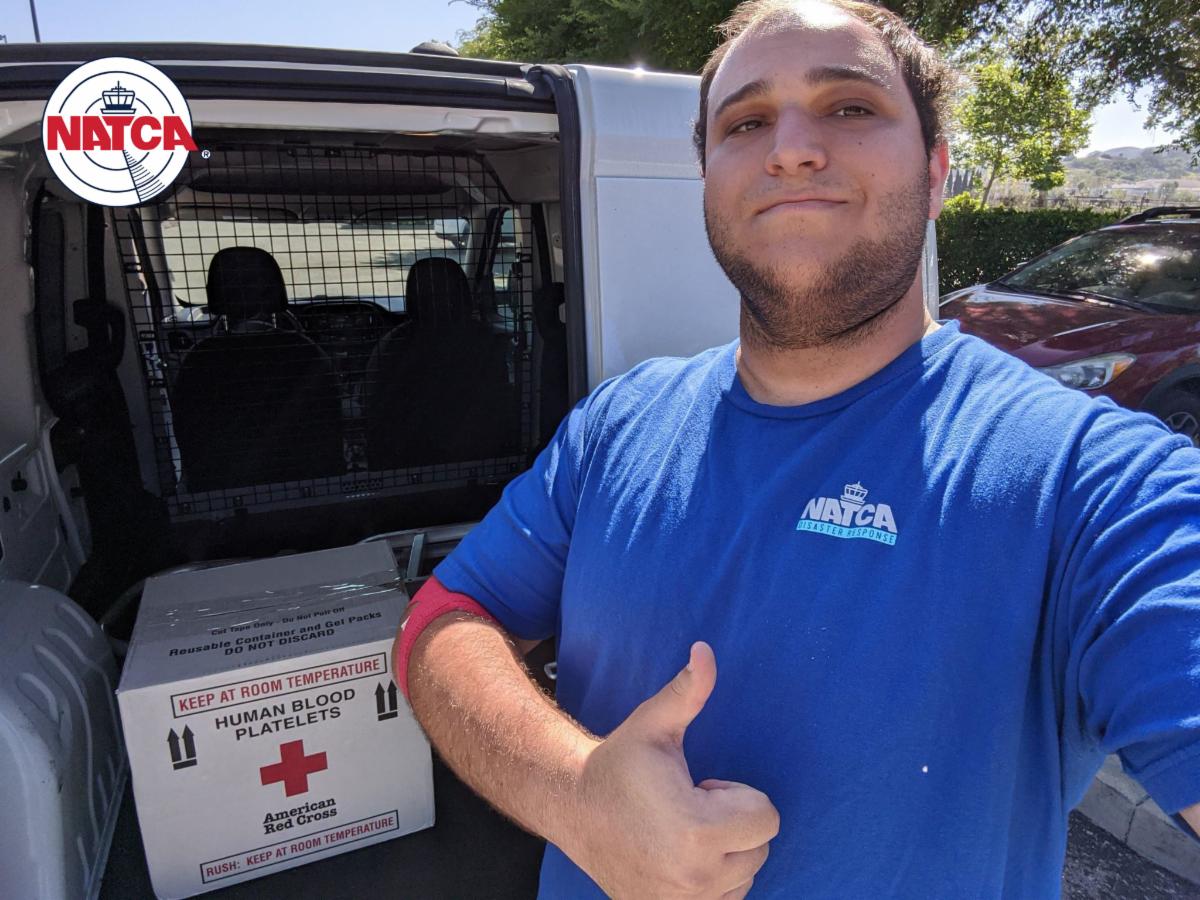 Gabriel Zeifman, who serves as the local NATCA vice president at Joshua Control Facility (JCF), is also currently serving more than four dozen Southern California communities with critically important volunteer work. He has been working for the American Red Cross as both a blood and platelet donor and also as a delivery driver of blood and blood components. This is a 24/7 operation during this COVID-19 national emergency. Zeifman has already been to 40 hospitals throughout Southern California.

Zeifman, who is also a pilot, won the 2019 Alaskan Region Archie League Medal of Safety Award while working at Juneau ATCT (JNU). Below, he shares the story of his current efforts:

I’ve been a regular blood donor since I started college, but I’ve only recently gotten into donating platelets. During a platelet donation, your blood is collected and separated by an apheresis machine, with the undesired components returned to the donor either via the same needle or via a dedicated return needle (most platelet donations use two needles).

The process takes about two hours, and you can do it every seven days (up to 24 times per year). Every 28 days, an additional unit of plasma may be taken. Since the start of the safer-at-home orders, I’ve been donating platelets/blood weekly. I noticed an American Red Cross call for volunteers, and the first job I saw listed was “Blood Services-Transportation Specialist.” I signed up and completed the training, which included some basic screening, a defensive driving class, and a road test/OJT.

The job is primarily delivering blood and blood components to hospitals, both on a routine basis (you can sign up for scheduled routes), but also on an emergency and non-routine basis. We get emergency orders for blood products needed in a timely fashion for a specific patient. We also get ASAP orders, which are less urgent. Examples of these are replenishing the stock of blood at a hospital that used its stored components, or products for a scheduled transfusion happening the next morning. We also pick up samples to bring back to the lab for cross-matching, transfer blood between hospitals, and pick up from blood drives and donor centers to bring back to the hub for testing and processing. I’ve already been to 50 hospitals throughout Southern California (map below, which also shows Red Cross locations with red dots), mostly in the Los Angeles area but as far away as San Diego and my home community of Lancaster.

I am so proud to be a NATCA member and serve in a leadership position at Joshua Control Facility (JCF). It’s similarly rewarding to be able to get out on the front lines and do a small part to support our healthcare workers and the patients they care for, and to participate somewhat in healing our country. The blood supply is down with large numbers of blood drives cancelled and people cancelling their appointments. Thankfully, the overall blood demand is also down with many elective procedures cancelled and trauma cases being less frequent. But there is still a tremendous need for blood and blood components and donors are very much needed. Cancer patients still need platelets, trauma is still occurring, and COVID-19 patients often use an extraordinary amount of blood products due to the nature of the disease to destroy blood.

I highly encourage everyone who is eligible to get out and donate blood or try an apheresis procedure if you have a suitable blood type and are willing (double-red cell donation, platelet, plasma). I also encourage everyone to consider using some of your excused absence time to volunteer if you can; the help is very much needed and it’s very rewarding. Most hospitals need a variety of volunteers and are doing temperature checks and basic wellness checks for safety. The Red Cross also does this at donor centers.